The teebird is one of the most precise and reliable fairway drivers in a disc golf round. In my experience, the disc’s ability to combine a straight flight, excellent speed, and high glide can give more accuracy and extended fight attributes while in different types of winds. If you are looking for pin-point accuracy or looking for some distance, the teebird is one of the go-to discs you can put in the bag.

Meanwhile, the teebird3 symbolizes the evolution and improvement of the original teebird. Many disc golfers said that this type of disc is quicker and faster and is the real deal. If you are looking for speed with reduced glide to give consistency and accuracy in every flight, the teebird3 is worth considering.

In this article, we will try to differentiate the original teebird and the teebird3. Our team will try to show some similarities and differences and other information related to the two fairway drivers. We will also compare other similar discs to give you additional points and information pertaining to all the discs featured.

The Teebird and Teebird3: What’s the Difference

The Teebird – Classic Disc by Innova

The teebird is a slower fairway driver, it has a 7 speed. When compared to the teebird3, more or less, they the same flight numbers. This classic disc by Innova is a popular fairway driver among disc golfers.

If you are looking for straight lines and an easy fade throughout the flight, the teebird is a dependable all-around control driver, which should provide consistency to the players. If you try to look at the disc’s profile, you can see that it is a bit dome, meaning it will carry more air underneath it than a flat top disc. It will also stay in the air a little bit longer, and it’s a solid disc that will hold up well reasonably well.

This driver was my first disc, and I can still remember how terrible I was, regarding my form. But using this disc, I could still get around 300 feet despite the handicapp. This disc will offer a trustworthy flight path and is beginner-friendly. If you want to learn how to throw flat and anhyzer shots, I highly recommend this fairway driver.

The Teebird3 – An Evolution of the Teebird

This disc is also a fairway driver but is sleeker and faster compared to the original Teebird. It also uses a flatter top to make it faster while gliding a little less to make it more precise and accurate with your shots. If you are looking for pinpoint accuracy, this driver disc will do precisely what you want. This disc is also great when shaping shots, especially if you play wooded courses where the need to bend a forehand flex or a backhand anhyzer around the trees is needed.

In terms of its flight path, this disc flies straight and comes with a slight reliable fade towards the end of the flight. It also offers versatility in using both the forehand and the backhand and offers enough glide for any player looking to pound it down the fairway. This disc is also impressive for giving players control when hitting the tunnel shots, if you play many wooded courses.

Physically, this disc feels excellent in the hand and will give every player the confidence they need when stepping up to throw. This disc also has some predictability in both open and wooded shots. It can hold an anhyzer turn while flattening out on end. You will also see a low glide that makes the disc more predictable in windy conditions.

What’s the Difference Between the Two? 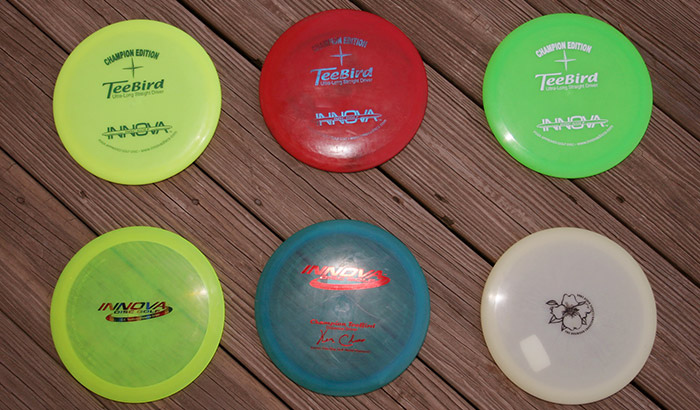 Based on my experience, the two discs are both fairway drivers, but I used them for different shots. I used the teebird for straight shots that needs a fade towards the end, while the teebird3 is used mainly on flex shots to get a nice “S” flight with minimal fade. Likewise, the teebird3 is more stable between the two.

Also, the teebird is an excellent disc for accurate, stable lines. Meaning, if you want to throw it with straight shots, hyzer, or anhyzer shots, the teebird can make them all easily. Meanwhile, the teebird3 comes with a mellow high-speed turn but does not have as much fade compared to the original teebird, even though the flight numbers suggest that they have the same fade.

Selecting between the two discs will depend on your needs and preference. For me, I prefer the teebird3 because it’s flatter and less glidey. I have trusted the disc in different conditions, such as when it is windy where I want more reliability and beef in the shots. In the headwind, I can control the disc with ease.

Comparing the Teebird with the Other Popular Drivers

The Teebird vs. Thunderbird

Both discs are found in my bag. However, if the teebirds are way shorter, the thunderbird will give more distance comparatively while having similar stability but a more sweeping fade. Throwing a less glidey teebird is still my preference when it comes to throwing with more distance. However, the thunderbird can handle low ceiling power shots a bit better and will give you more push to the ground in this type of shot. For me, the thunderbird also holds lines better and is highly recommended when looking for a disc that ignores moderate wind.

The Teebird vs. Eagle

While the teebird is known to offer stability on any shot, you’ll have difficulty throwing an teebird similar to the eagle. However, it may be difficult for the teebird for certain shots in the woods. The eagle can be thrown on a hyzer and can flip up and add more distance than the teebirds, while offering a nice straight flight.. The eagle also can shape shots when throwing flat or throwing anhyzer.