It is normal for a newbie or inexperienced disc golfer to hear or encounter a lot of unfamiliar terms which are only related to the sport. These terminologies will often confuse anyone, but as you learn and gain experience, you will realize the importance of each term as you grow as a player. One of these terms is the hyzer flip, a type of shot that can be used in certain situations in the game.

But how to throw a hyzer flip?

The answer to this question and other information related to this shot will be discussed in this article. As an experienced player, I feel like I need to share all the knowledge and information about this type of shot. Apart from that, our team will be sharing tips and methods on the proper ways to throw and maximize the hyzer flip in your game.

What is a Hyzer Flip?

Before getting deep into the analysis of a hyzer flip, let me first explain what is a hyzer?

I consider this throw as one of the coolest in disc golf. I always feel that throwing this type of shot is nice because we are doing what the disc is supposed to do. With a hyzer flip, you will need an understable disc that will be overpowered by a hyzer release angle. Because of the understandability, it will react to the release angle while allowing the disc to flip up to the flat position which will result in a long but straight flight pattern.

When to Use a Hyzer Flip?

A hyzer flip is best suited to use on a lot of wooded courses. Usually, these types of courses will give you a lot of tight gaps with the need to keep your disc as straight as possible. Hyzer flips are applicable to open spaces or fields also. It is best used in situations where you want the disc to fly straight and avoid the disc fading and going to the rough.

Things to Consider when Throwing a Hyzer Flip? 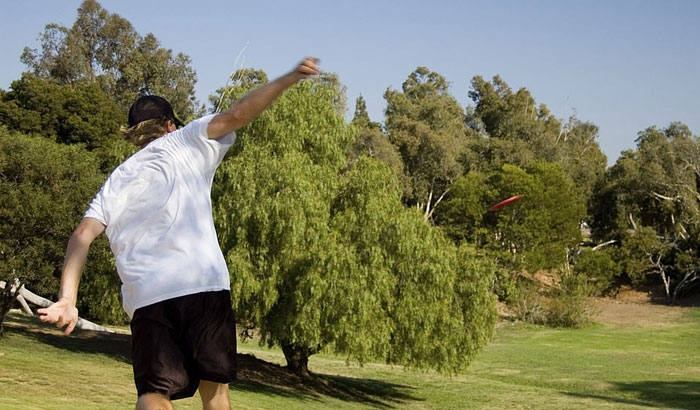 There are few things to remember when doing hyzer flips that can make or break your throw. The disc that you will use is important while other factors need to be accounted for to make the throw more successful.

As I have been saying all along, you need to have an understable disc when throwing a hyzer flip. The disc’s turn rating usually is from +1 to -5 and the closer the disc is on the -5 rating, the more understable it is which is more suitable for hyzer flips. Avoid using discs with a +1 turn rating while a disc between a -1 and -3 will do just fine. Please take note that below -3 will also be tricky because it might turn into a roller and might not give you the best hyzer flip if you have a powerful and speedy arm.

When trying to learn and familiarize yourself with hyzer flips, it is the same overall process when you first learn the sport. Start with the much slower disc which is the putter, then you can go up using the midranges and a fairway driver. Then you can try the distance driver. But the most important thing is to execute the shot correctly with the different types of discs.

When throwing hyzer flips, you want to focus on hyzering the discs out forward. Getting the disc moving forward is going to help you keep it down the fairway rather the fly it high and contending the trees and other obstacles it might face during the flight.

As mentioned earlier, there are three important factors you must consider when throwing a hyzer flip: the right disc, the proper angle of release, and the right velocity of the throw.

One way or the other, these 3 factors can influence the success or failure of your hyzer flip throw. Also, please take note that results may vary for every player that throws a hyzer flip. Some players may need more angle on the release while others need more speed and velocity on the disc before seeing the type of results you are looking for.

The Angle of Release and Power

Throwing the disc on the hyzer angle will push the disc in the direction where it naturally wants to go. If you see the disc go straight then flip to flat during the flight, this is an indication that the disc was thrown properly. Sometimes you will also see the disc turn and then do a little fade and this is what you want when throwing a hyzer flip. If you see the disc goes to the right more than what you expect, you likely threw it with more power and/or less of a hyzer angle. The best thing to do is to adjust your power to a lower level and/or change the angle of your release.

When an understable disc is thrown and released on a hyzer angle with more power, it will likely hold the hyzer angle briefly at the early part of the flight then will start to flip up to flat relatively quickly. Also, throwing a similar disc with a RHBH throw will make the disc spin clockwise and will likely go in the same direction it is spinning.

I have seen a lot of players using putters when they were starting to learn the hyzer flip throw. The reason behind this is that putters are usually easier to throw and manipulate which makes it a perfect disc for beginners. During the disc selection, aside from the understable disc as a preference, the disc should also work with the arm speed and the condition of the course or field of practice. Most understable discs will flip and glide while flying straight in its direction. However, it will take a lot of practice and experimentation on your part before you will figure out the right way to throw a hyzer flip and achieve the desired results.

If you have a disc that flips over when thrown with maximum power, the best thing to do is throw it with on a hyzer angle so that you will get a hyzer flip. Also, if the disc fades out when you throw it, the chances are it will not hyzer flip. I am advising you to find a disc in your bag that flips at high speeds to give you the best chance to do a hyzer flip. However, the most challenging part is really trying to keep the disc down.

But if you really want to improve your hyzer throws, work on slower discs first such as a putter. Once you develop the confidence you need, then you can try midranges and fairway drivers. After gaining a lot of valuable experience, then try a hyzer flip with some distance drivers. The most important thing is to find the right disc, power, and angle to achieve the right results when throwing a hyzer flip.

Learning how to throw hyzer flips is a challenge in itself, but as I say, it is the coolest shot of disc golf and is worth learning. The key to learning the shot is to find the right disc that will complement your power and your ability to release on the right angle. Just keep on working on your shot and constantly stay out on the course and field and find the right rhythm on your shot until you achieved the best result you are looking for. Do not stop until you perfect your hyzer flip throw.