How to Throw a Disc Golf Flex Shot

One of the amazing aspects of our sport is our ability to shape our shots. It is frequently a necessity. Course designers intentionally design holes that force us to carve around trees and obstacles. That makes disc golf fun and interesting. When we hit the lines right, the flight of the disc is a thing of beauty. One of the more impressive flights of a disc is the flex shot.

For a brief reminder of disc golf terminology, a flex shot is one where the player throws an overstable disc on an anhyzer angle, knowing that the disc will straighten out from the anhyzer line, then fade at the end of the shot. The flight line looks like an exaggerated ‘S’ line.

Here are a couple more quick definitions of disc golf terms used above:

this is a discs ability to resist the natural tendency of a disc to turn in the opposite direction of spin at a high rate of speed. For a right-hand, back-hand throw, discs will turn to the right at high speed, then finish left at low speed (fade). Overstable discs resist the turn, and usually fade harder as they slow down.

Anhyzer (opposite of hyzer)

When a disc is thrown at an angle where the right side of the disc angles down, making the disc fly toward the right.

A discs propensity to turn to the right at high speeds. It is also the third number in the four-number flight rating.

A discs ability to resist turn at high speed, and how far it will travel to the left as it slows down. It is the fourth number in the four-number flight rating. 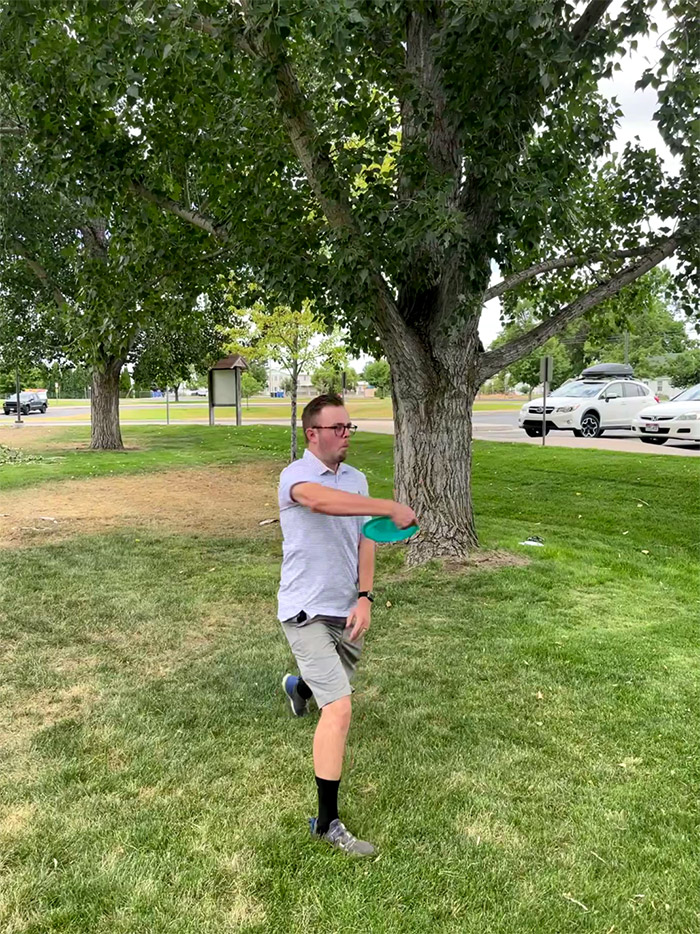 Having the flex shot in their tool bag gives a disc golfer one more way to tackle the obstacles in the fairway. Knowing the disc will turn to the right, but then reliably ‘flex’ back into the typical flight of an overstable disc, opens many possible routes around or through trees.

To successfully throw a flex shot, there are a couple of key factors:

Disc selection: This is a situation where your disc choice is very important in the proper execution of the throw. Since it is necessary that the disc overpower the anhyzer angle, choose a disc that is overstable for you. Obviously, better players need discs that are much more overstable than discs thrown by beginners. If you choose a disc that is too overstable, you will lose the distance and line that is at the heart of a flex shot. Too understable and the disc might never overcome the initial anhyzer angle, and will crash to the right or end up as a roller.

The flex shot is a technical throw that should be practiced regularly to ensure proper disc selection for given conditions. A slightly less overstable disc will allow a longer portion of the flight on the anhyzer angle, meaning that the disc will travel further to the right before leveling out, then finishing with a left hand fade. A more overstable disc will flex out faster and won’t have as long of a flight. Knowing which disc to use is something that can be learned on a practice field. 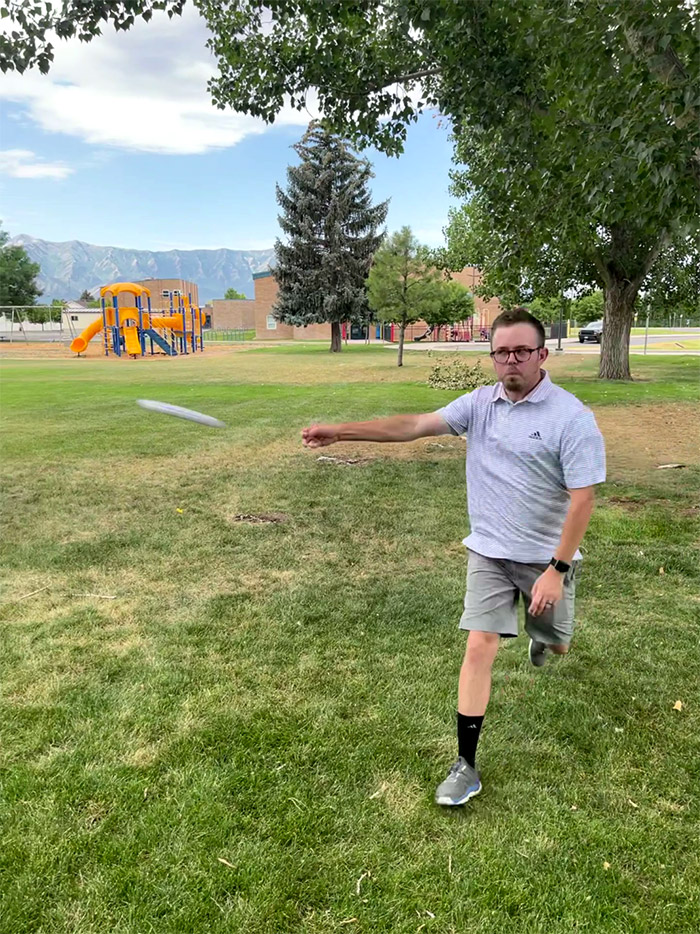 Release angle: Even if you carefully and accurately select the right disc, the technique can still fail if you release the disc at the wrong angle. It is crucial that you practice disc angles and get familiar with the proper angle for the disc you are throwing. Experimenting with the angle will give you more options in a bigger variety of situations. A steeper release angle will give the disc more anhyzer to begin with, which translates into more distance to the right (on a RHBH throw) before the overstability of the disc straightens out the flight. Conversely, if you throw the disc on a flatter angle, it won’t travel as far to the right before it straightens out and then turns left. Either of those angles could be used, depending on the situation.

Use the Proper Form 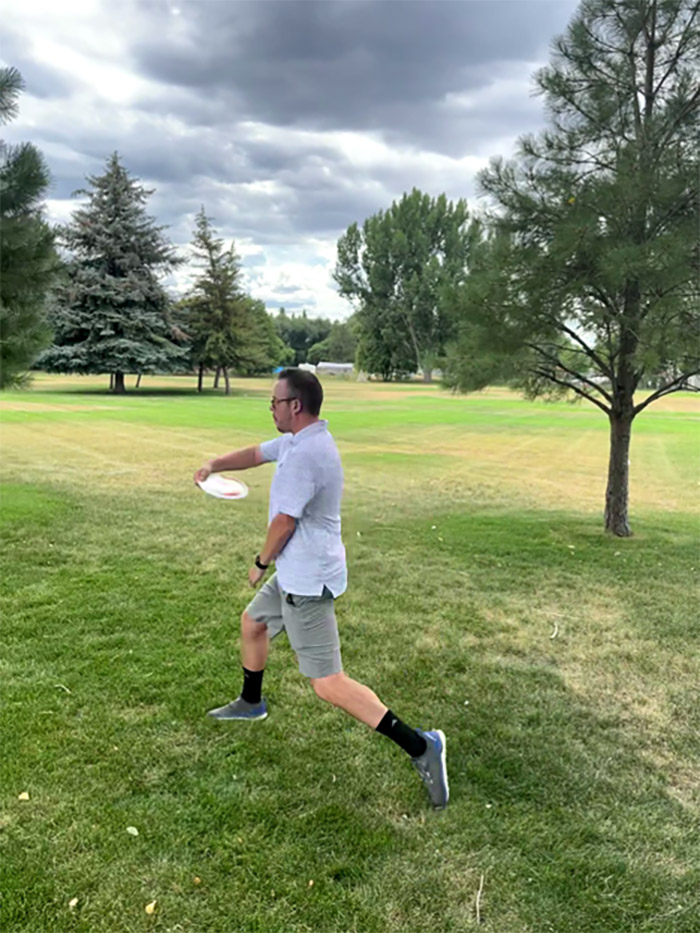 Form: Since the flex shot is a technical shot, it’s important to have really good form when attempting the shot. You’ll need to throw with a lot of power and snap. That will ensure the disc flies properly, particularly while still in an ‘anhyzer’ angle. Two other key elements of the proper flex form are nose angle and height of the throw.

As a rule you don’t want a lot of height on your flex shot, since this will take some of the energy out of the throw, which will slow the disc down faster and force the disc out of anhyzer too soon. Flattening out your throw and keeping the nose angle down will help keep the disc fly flatter, and farther.

With a typical RHBH throw, we bend forward slightly at the waist during our pull. With a roller shot, we lean back slightly. When throwing a flex shot, our body will be anywhere from straight to slightly leaning back. Our exact position will depend on the angle of the flex shot. You want to get the angle that you need by bending at the waist, and not turning your wrist. If you try to get the angle with your wrist it will usually result in missing your line and not getting the power you need. With a forehand flex shot, you can change the angle of the wrist to achieve the proper disc angle.

The flex shot is a powerful utility shot that each of us should incorporate into our disc golf arsenal. It takes some field work practice to get the form down and learn how our discs fly when thrown on an anhyzer angle. Once we learn the flex shot, it is something we can use to expand our shot selection.