One of the most popular throws in disc golf is the backhand. Many players have been vocal about how the backhand helps them throw more distance with minimal effort. However, as good as the backhand throw is, one must know the correct technique and mechanics to perform the right backhand throw. A disc golfer must know how to throw a disc golf backhand properly to maximize the benefits of throwing the throw.

In this article, our team will be focusing on the mechanics and technique of doing the backhand throw. It will involve tips and tricks on doing it correctly and other information related to the backhand. We aim to help aspiring disc golfers learn the proper technique and bring their disc golf game to another level.

Throwing the Backhand the Right Way

One way to achieve success in throwing backhand is to learn the proper form and technique. It includes head, body, arms, and foot motion and its coordination with the body movement.

The Proper Reach Back

If a disc golfer does a total reach back, it will translate into a reasonable distance, while a short reach back will be good for short and accurate shots. But the right way to do it will need you to pull the reach back away from the body to allow a steady point of release. Also, whatever the distance of your throw, it is essential to reach back in a straight line motion to keep the consistency of the pull-through motion.

The Proper Look Back

When it comes to the movement of your head, doing a little look back while turning away from the target when reaching back is the best way to do it. Doing this action will let your shoulder turn while pulling your arm straight backward. Failure to do this step will make you susceptible to rounding, resulting in inconsistent release points.

The need to lock the hips throughout the reach back while throwing the disc is essential. You will only open the hips after the release of the disc. The force created when opening the hips will make the disc to go forward in motion. If you do it the right way with the right timing, you will get excellent control and distance.

When you are doing the run-up, the plant foot must be planted appropriately during the peak of the reach back. Meaning, all the weight must be in the back leg once you are reaching back. Then, while you shift your weight forward, the next step is to pull the disc while rotating the plant foot. Having great timing with the plant foot and the reach back will allow you to be more consistent while gaining more control over your shots.

Tips in Throwing a Better Backhand 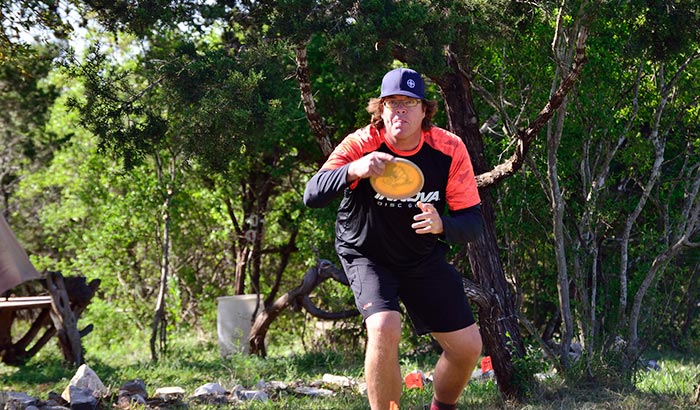 Getting a Better Grip

The main power behind the backhand throw comes from your arms extending to the fullest. So, you will achieve more power by extending your arm, resulting in more spin and power in your shot. If you are struggling with your release while using a firmer grip, that’s the result of rounding. Also, pulling the disc on a straight line to the release points, your grip will not be strong enough to pull the disc offline.

Releasing the disc flat to nose down is the best way to have a consistent flight path and get the most distance. To achieve this, you’ll need to look at your grip. An excellent way to find your grip is to line up the disc with the bottom middle of your hand and in between the pointer and middle finger. And then wrap all your fingers around the rim. Wherever they come to rest on the disc’s rim will most likely be the most comfortable grip for you. This fleshy part at the base of your pointer finger must be on top of the disc. That ends up making the disc fly a lot more flat to nose-down, which will help in giving you a lot more distance.

When you are trying to throw for distance, it can be easy to try and throw as hard as you can or move as fast as you can but focusing on balance will almost always end up in more control and more power. The biggest tip for balance is to try to shift your weight over your toes. If you lean forward just a little bit, that will make you a lot more balanced and will give you a lot more range of motion in your hips, in your core, and in everything.

However, this does not apply when you are rotating. You need to set your plant foot to the left which allows you to rotate over your heel, allowing you to turn over your toe. This action will end up in more power. But until you are planting your foot, you need to lean over your toes so that you can get some good push off of your back leg giving you more power.

The Right Reach Back

Reaching back is an integral part of the backhand throw, but people make many common mistakes when trying to reach back. The first is the timing in which the player must time the reach back, so it peaks when your front foot hits the ground. The disc and your foot are offset, and you can stay balanced while you are reaching back because if you are not balanced, the second thing that happens a lot is overextending.

You do not need to reach back very far, just set your back to the target and reach the disc as comfortably far back as you can. Just a little bit of turn and extending the disc away from your chest is an excellent place to start from reaching back.

When reaching straight back, it is essential to reach away from your chest as you reach back. You will see many people who will reach across their body while trying to keep the disc tucked in and tight. This will put the disc in an improper position, limiting your ability to throw with power.

From the reach back, the disc should be able to go straight forward to the release point. It is prevalent for people to reach across their bodies and then spin rather than pull the disc straight and putting the disc on a curved line. When this happens, the disc might slip out early or you may grip lock and release it late. When throwing the disc with this reach across your body technique causes the release timing to be very difficult. So, it is crucial to pull the disc straight so that no matter how hard you are pulling the disc, it will release straight to the target.

The main idea here is to pick out a target and draw an imaginary straight line from it to behind you. Then you’ll put the disc on the line and position yourself accordingly. Keeping your arm straight where the disc and your shoulder are on that imaginary line.

The disc golf backhand is a very unique motion amongst all sports. So it is essential to practice it, practicing it will make it more commonplace and easier to perform. My favorite practice routine is to go out in an open field and throw all my discs from one end to the other and pick them up and throw them back.

That will give you a lot of repetition compared to spending time throwing on the course. It will also provide you with room for failure and let you do new things you have never done before, which is the best way to get better.

Learning how to throw a backhand in disc golf is an essential skill that every disc golfer must learn. It is the most popular throw for a reason. Mastering the backhand will give a lot of advantage to the player in terms of getting more distance and control on your shots. I am hopeful that you will gain a lot of pointers and tips after reading this article. Keep on practicing, and become a better disc golfer.