Innova offers more than a hundred disc options for its customers – that’s a lot of discs. Beginners and veterans alike may not have the time to go through each of those discs to determine which is the best. Though trying out each disc is the preferable scenario, it is not practical. So to help you decide which Innova disc is for you, I’m giving you the comparisons of Innova’s flying drivers. This is the Thunderbird vs Firebird comparison.

I will discuss their dimensions, ratings, flight patterns, plastics, primary usage, and required skill level. Let’s get to it!

In the dimensions category, I will give you the physical characteristics and measurements of the two discs.

So far, the two discs seem almost exactly the same except for very small differences in height and rim depth. But those two differences give these two discs very varied performances.

Every disc golf player should know how to read disc ratings. The ratings give the players an idea of how the disc will perform under perfect conditions.

Every disc golf player should know how to read disc ratings. The ratings give the players an idea of how the disc will perform under perfect conditions.

The Thunderbird is a stable disc. That means that it is not very speed-sensitive (unlike an under stable disc) and will likely fly very straight with a right-hand backhand (RHBH) throw. Of course, it will only fly straight if the proper throwing technique, arm speed, and arm strength are applied.

Under perfect conditions, the Innova Thunderbird will fly only slightly to the left with an RHBH throw. For about 300 feet, it will maintain that course then it will fade a little to the left for about another 80 feet.
If thrown right, the most probable distance you can get from the Thunderbird is somewhere around 350 to 400 feet.

When you throw the Firebird RHBH, you will see it veering to the left for about 300 feet. Then you will see it fade very hard, because of its high fade rating, as it loses speed. The longest flight distance you can get from a Firebird is very close to 360 feet.

The general flight pattern is not set to stone. The plastic with which the discs are made affects their flight pattern slightly. With that said, let us look at the available plastics in which the Thunderbird and Firebird come.

The most common plastic for the Thunderbird is Champion. However, even with this one plastic, you are getting many options. The weight system available ranges from 166 grams to 172 grams.

Aside from Champion, the Thunderbird comes in rarely comes in plastics such as Star, GStar, Metal Flake, Pro, and DX.

The Firebird also most often comes in the Champion plastic. And like the Thunderbird, you’re getting a lot of options on that front.

However, it also comes in all the plastics the Thunderbird comes in except for Metal Flake and Pro. So it is available in Star, GStar, and DX. 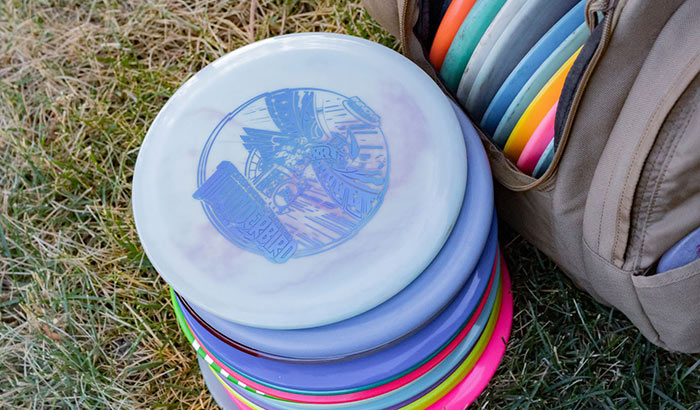 Both discs are categorized as control drivers. But their differences in their stability, flight paths, and ratings also give them an edge over one another in different scenarios.

Also, it is good for controlled hyzer shots and placement shots because of how predictable it is. If you need your shot to end in a spot relatively straight from you, the Thunderbird is the best option to go for.

Due to its over stability, the Firebird is highly effective for headwind drives. In my opinion, it works better as a forehand driver because, with that throw (RHFH), the disc is mostly unaffected by a strong headwind.

The disc also works great for flex shots and big hyzers. However, it will take quite a highly skilled and strong player to pull those throws off with the Firebird.

The Thunderbird and Firebird discs have enough differences that they require differently skilled players.

The Thunderbird is more beginner-friendly. It flies straight and has a minimum fade. Even beginner players can predict the Thunderbird’s flight path accurately. But more than that, the Thunderbird flies with the control of a fairway driver, even though its range matches a distance driver. It is an easier disc to throw compared to the Firebird, yet it produces extremely predictable results.

The Firebird is a harder disc to throw and expect it to fly according to the results you want. The disc is very fast, yet predictable. Even though the disc is less beginner-friendly, I emphatically suggest the Firebird for your first very overstable disc due to its predictable and reliable nature.