There are a lot of things players of disc golf have to understand. Aside from the rules and gameplay of the sport, they have to understand the right techniques, equipment, and flight patterns. Just covering the difference of discs and their ratings and their types and their plastics can overwhelm a newbie. But when I saw a few players using a mini disc, I wondered, “What are mini disc golf discs used for?”

The differences and purposes of the four main types of discs wasn’t enough to overwhelm new players. But add to that the mini disc, that’s just a lot of info to absorb. However, as I got better at the sport, so did my understanding of it. To beginners wondering “What are mini disc golf discs used for?” Here’s a thorough explanation.

The main purpose of mini disc golf discs is to mark the position of the disc previously thrown. In the game, every time a player throws a disc, his position on the course changes. He then has to throw another disc (or the same disc, depending on usage) to get nearer to the hole. However, the nearest to the hole he can throw is on the spot on the previous disc landed. This is called the lie.

The mini disc marks that spot. If a player doesn’t have a mini disc, he has to leave his previously thrown disc on the spot it landed. And when he throws the next shot, he will throw at least a disc farther from the hole than necessary. A mini disc gives the player that extra nearness to the hole.
For some players, that extra foot of nearness to the hole doesn’t really matter. But to some, like myself, those 12 inches of nearness can make the difference between a successful or a failed shot. I find it helpful to use a mini disc golf disc, especially when putting.

Do Players Have to Mark Their Lie

The Professional Disc Golf Association (PDGA) states that players don’t have to mark their lie every time, except for a few exceptions.

Are There Benefits to Using Mini Disc Golf Markers? 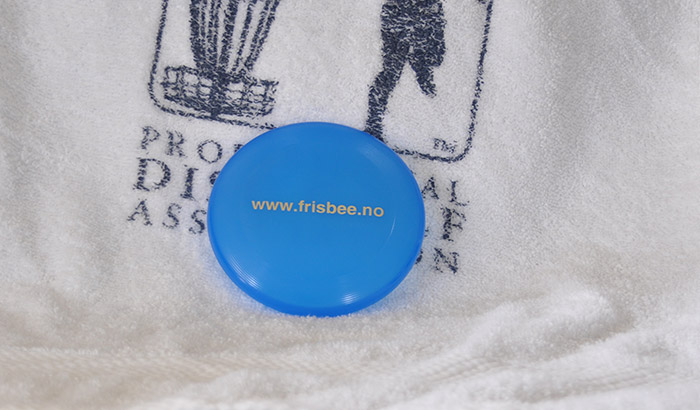 I feel like the extra space a mini disc gives me is indispensable. Without a mini disc, I have to leave my previous disc where it landed and throw the next shot behind it. But marking my lie by placing the mini disc in front of my previous disc gives me a few more inches to work with. These few inches help me better get my bearings, especially when focusing on putting.
Placing Mini Marker Discs Gets Me Into the Right Mindset

Another benefit of using a mini disc that I can’t forego is the routine it gives me. Players have a routing before making a shot. These routines differ from player to player. A part of my routine is placing a mini disc in front of my previous disc. This small action gets me into the mindset of making a throw.

When I’m winding up for a throw, I don’t want to see my driver or midrange disc on my approach path. I want as little obstacle in my view as possible. I want to keep my focus on where I’m throwing my next disc.

Additionally, slowing down and marking my lie gives me more time to contemplate on my next throw. The extra few seconds afforded me when marking my position helps clear my head.

But again, these advantages apply to me personally. Other players don’t like using minidisc golf discs. They prefer getting into the next throw without pause. The usage of a mini disc golf disc comes down to preference (unless the rules of the sport says otherwise).

What Markers Does the PDGA Allow?

The PDGA has standards on what mini discs are allowed for professional games. According to the association’s technical standards guide, the mini disc must be within 7 to 15 cm in diameter. That is the only rule.

The disk can be made of various materials like wood or metal, as long as it is within the specified diameter. Players can even use custom made mini disc golf markers, the PDGA won’t have any problem with that.

What are mini disc golf discs used for? They are used to mark the player’s lie. Do players have to mark their lie? Only on two occasions does the PDGA require players to mark their lie. These are when the disc flies out of bounds or a rule requires the player to change their position

. Are there benefits to using mini disc golf discs? The usage of mini disc golf markers comes down to preference. Some players find it advantageous, others don’t. What markers does the PDGA allow? As long as the marker is 7 to 15 cm in diameter, it is allowed.