When it comes to the types of throws we use in disc golf, the backhand and forehand are by far the most common types. However, there are other shots in disc golf that might not be as popular as the backhand/forehand, but are valuable tools in our disc golf skill toolbox. Call them utility shots. They can help in a bad situation. Or are simply an alternate way of driving, or approaching, the basket.

My buddy Mick is one of a few local club members who frequently throws the overhand shots. Sometimes he’ll throw a thumber down a narrow fairway, knowing he can hit a vertical gap. Other times he will throw a thumber on a relatively open fairway because he knows the disc will bounce and come to rest in the same way most of the time. There are variables, like in any disc golf shot, but he can get the disc to land close to

where he wants an overwhelming majority of the time. He also has the shot in case he gets in trouble and needs some vertical distance to clear an object.

Get Out of Jail Free

Although it may not be as popular, the overhand shot is a tool that can get you out of a bad situation, such as being stuck behind a row of trees with the basket on the other side. Or it can be used on a drive or approach shot to avoid obstacles or land in a narrow area. The overhand shot is popular among people who played baseball, since some of the same body mechanics come into play. The motion is similar to a long throw from an outfielder.

The common names for the overhand shots are the ‘tomahawk’, and ‘thumber’ shots. The main differences between the two comes down to grip and flight plate direction. Those differences determine the direction of rotation, direction of fade, and the direction of any ground action. Let’s look at those two throws and break down how to correctly implement them.

The flight of a typical overhand throw resembles an arc. How high the arc is depends on the type of throw, but in a typical flight, the disc will ascend while quickly rotating, then descend to the left or right of the thrower. For a shot through a gap, the arc is usually flatter.

How to Throw a Thumber 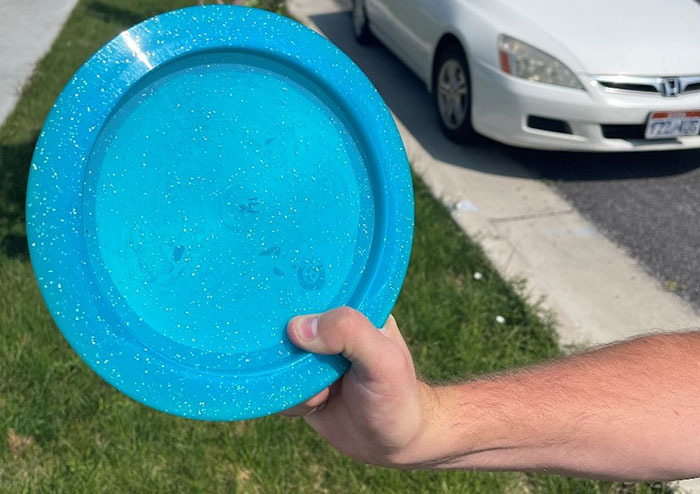 For the ‘thumber’ throw, the disc is pinched between the thumb and the forefinger, with the disc oriented in a way that the thumb is on the inside rim and bottom of the flight plate, and the forefinger is on the flight plate. When thrown in this manner, the disc will rotate counterclockwise in a corkscrew motion (in relation to the thrower) and finish to the right of the thrower.

How to Throw a Tomahawk

With a ‘tomahawk’ throw, the disc is still held between the thumb and index finger, but this time the thumb is on the flight plate and the forefinger is on the underside of the disc and on the inside rim. The rotation of the disc during flight is the opposite of the thumber. The tomahawk will rotate corkscrew clockwise, then finish to the left. As a rule, the disc will finish in the direction of the flight plate, when the disc is in the thrower’s hand.

The run up for the overhand shot is similar to the forehand shot. Using a crow hop is one method of footwork for the overhand shot. The crow hop is another baseball term. It’s the double-hop on one leg, followed by planting the other foot to ‘brace’ for the throw. If you’ve watched baseball, you’ve seen the move from an outfielder making a long throw. That method translates fairly well to disc golf. Walking up to the throw is another method for disc golfers. 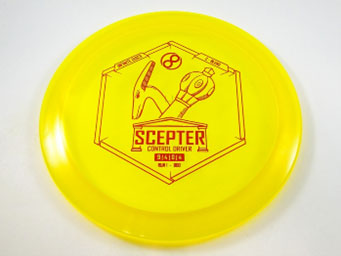 The overhand shots are tools that need to be practiced regularly. If you don’t have a tomahawk or a thumber down yet, find a lower speed, less overstable disc and hit a field for some practice. Start slow, as that particular motion might be new to you. If you feel pain while throwing, slow down and try a lighter or less stable disc. Don’t risk an injury to learn the throw.

Overhand throws are a valuable option to have in a game. They can save strokes by getting you out of trouble more efficiently, or serve as a viable option off the tee pad. As you implement the overhand shot, you’ll find uses for it in a variety of situations. Practice the tomahawk and/or thumber to get a good feel for them, and the discs you’ll throw