When I was just starting, I always felt that overstable discs are so hard to throw. Going back on those days, I realized that it was normal for me to feel that way because of my inexperience and lack of form and technique. But if a newbie disc golf player can learn how to utilize this type of disc by using it as a utility disc over distance, the player can discover that it can save many strokes by throwing an overstable disc the right way.

I must admit that an overstable disc is best used and recommended for power throwers that bring substantial experience. The results will usually be disappointing for inexperienced players, with the disc fading early and the desired distance not achieved. But it should not be this way because there are things that inexperienced players can do in terms of learning the technique and the right way to throw an overstable disc.

In this article, we will be sharing tips and recommendations on the right way to throw an overstable disc. This article is geared towards inexperienced players looking to improve their game and their form and technique.

What is an Overstable Disc?

Regarding flight rating, the overstable discs have a higher fade rating than the high-speed turn number. If you are not familiar with the flight rating system, you need to get back and learn how it works because it can help you determine which is overstable and understable discs. An overstable disc will be turning opposite of the spin of the RHBH (right-hand-back-hand) thrower then fly straight at the beginning before fading left at the end of the flight.

In other words, when a player throws using the RHBH, the disc will be spinning right and then turn to the left. This situation will happen in reverse if the player is left-handed and throwing the opposite way. Also, there are other traits that an overstable disc will show:

If a disc golfer has gained some experience in the game, I suggest having an overstable disc in their bag. Also, power throwers with experienced can use overstable discs during the game and expect some good results.

How to Throw Overstable Discs 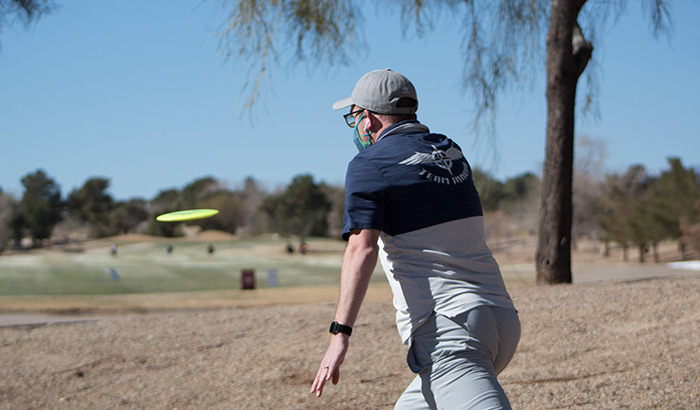 Using the backhand with an overstable putter will give you a strong fade to the left. But there is an alternative that you can do in a situation where you can’t use your backhand but can stretch out behind or around the tree. You can use a forehand and throw it at a 45-degree angle and wait for the overstability to flatten it out and bring it to the right again and land in your desired destination.

When throwing overstable midranges, it works the same with the putter. However, these discs are used at a further distance which should be longer than the range of the putter.

Flex throw will get you a reasonable distance, as I mentioned earlier, but there is another way to achieve maximum distance. You can throw it in a flat to hyzer angle and let the disc just ride to the left. In that way, if you go straight and then turn, you can just pull out your overstable disc in your bag and know it will just finish left for you every time you throw.

Other Ways to Throw an Overstable Disc

One of the best factors that can happen with an overstable disc is hitting the ground at a 45-degree angle called the skip angle. In this situation, you can see that you can get a forward skip with that and add a little bit of distance to it when it hit the forehand angle or the backhand angle.

This shot is one of the more advanced throws that professional players make while using an overstable disc. You need to go up over some trees when you do not have a forward shot when throwing the disc. So, you get your overstable disc and put it as much hyzer as you can while throwing it as high as you can and let the disc go over the trees and let the stability of the disc helps in crushing the disc towards the basket.

There are many ways to throw an overstable disc and apply it in your game. You can start to figure out and learn some utility shots using the overstability of the discs instead of throwing them as far as you can. It will be difficult at first, but with constant practice and determination to learn, using an overstable disc can be a great way to improve your form and skills in a disc golf game.