If you are new to disc golf, there is a great chance that you are still learning different rules that govern the sport. One of the rules that I feel you should understand, because of controversy, is the 2 meter rule of disc golf.

But what is this controversial rule? This unique disc golf rule is considered optional. Meaning, it will all depend on a particular tournament director and if they enforce the rule or not. But what is this rule about and why do many disc golfers dislike it? Let us find it out below.

What is the 2-Meter Rule in Disc Golf?

If the two-meter rule is in effect, a disc golf player will receive a penalty stroke if his disc lands in an area that is two meters above the playing surface but still in-bounds. This situation normally happens when a disc golf course has a lot of trees and the disc lands in a tree.

The two-meter rule is found in the rule book under number 805.02 of the Professional Disc Golf Association (PDGA) rulebook. There are certain points that you must remember about the two-meter rule.

Third, a disc is not subject to the 2-meter rule when it is supported by the discatcher for the hole.

When a disc golfer moves the disc before a resolution is made, it is presumed that the disc landed in a position above two meters of the playing surface. The player then receives the penalty stroke.

But why is this rule so controversial? Why do so many disc golfers hate this rule? Let us find out as we go deeper into this article.

Why do Disc Golfers Hate the Two-Meter Rule? 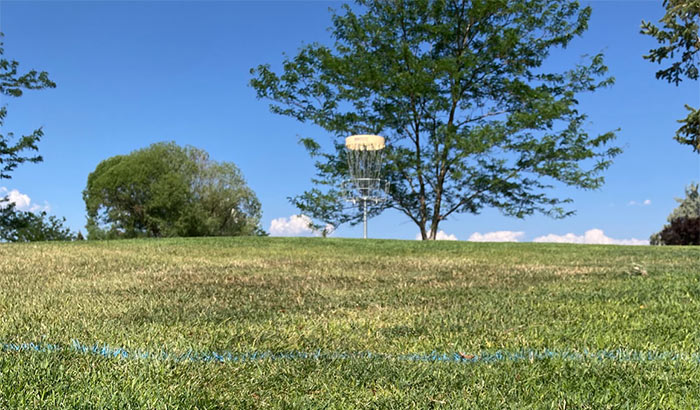 The disc golf 2 meter rule is considered a double whammy by many disc golfers. When a disc lands above two meters from the playing surface, you are already out of position from where you would have preferred to land. And then you are given an additional penalty stroke, most of the players consider this a double penalty. A two-stroke penalty to your game is not something you want in the round. In addition, some other issues and questions need to be answered in relation to this rule.

For example, the rule says that a tournament director of a particular tournament has the responsibility to determine if using the rule is allowed or not. Meaning, he has complete discretion over how the tournament is carried out, which leaves a bitter taste in some of the players’ mouths. Because of the discretion given to tournament directors, people feel that this becomes an opinion rather than a rule. Which adds to the controversy.

Generally it is unclear whether the disc is two meters above the surface or not. How do you precisely measure it? The truth is, there is no exact way to measure the distance between the disc and the playing surface. This ambiguity adds to the mixed feelings of this rule.

When this happens, the group will need to make a call by a majority decision. If a tournament official is in a position to examine the exact location of the disc and its distance, they can make the call as the rule states.

Is it possible to climb to the location of the disc and play behind it? A very tricky question. When the rule is not in effect, the card members will decide. And in my experience most people will not force another player to play their lie if it is in a tree. But if the two-meter rule is in effect, you do not have that option, as it dictates you move the lie directly below where it is. In this sense, the 2 meter rule saves you from playing some tricky lies.

The rule is very clear that when a disc lands two meters above the playing surface, the player can continue playing from underneath the playing surface. With all the confusion and drama surrounding the rule, it was not surprising that the PDGA has changed the status of this rule from regular to optional.

Why is the two-meter rule controversial?

There are many situations that make this rule so controversial for disc golf players. For one, since the sport is usually officiated by the players themselves, using the two-meter rule can be a cause of debate, resulting in a heated argument and fights among players.

Also, determining if the disc is within the 2-meters can be difficult since most players do not carry a measuring instrument. This can result in confusion and unnecessary tension among all the players in making the exact call.

There will be moments that the disc will land in a tree, but each player will have different luck once a disc hits a tree. Some discs will fall down eventually because of the wind and the movement of the tree. The not-so-lucky disc will just lay flat and stay in the tree.

In this situation, the players’ opinion with regards to the 2-meter rule can be very controversial. In fact, if the disc is stuck in the trees and stays there, it is not all about the skills. It is all about his luck which means some people argue that the player does not deserve the penalty. But that is just a part of the sport which we should live and accept.

Lastly, where the 2-meter rule is an optional rule, makes it controversial in itself. There are many disc golfers who want to abolish or remove this rule from the PDGA rule book. Other players want to move this rule into the regular status. Again, the debate of which is better, makes it very controversial.