Becoming a new part of a group is always a little nerve wrecking. We all want acceptance, and we all don’t want to stick out either. This post is to help you understand the norms of disc golf, or, the disc golf etiquette while playing out on the course. Some of these are only applicable when you’re playing with a group, while others are applicable in all situations; whether you’re by yourself or within a group. And if you’re playing in a tournament, some of these are official rules to the game. You can check those out on the PDGA website here. Read on to learn more about disc golf etiquette and how you should be acting out on the course. 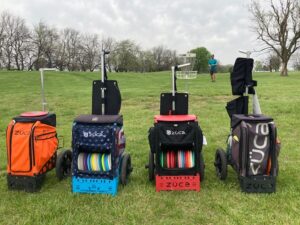 These rules, or guidelines, pertain specifically when you’re playing others. This etiquette is a good default to abide. Most everyone who has been playing for a while is familiar with these and follows them. One thing to make note here is that some groups may have their own set of rules that they follow, and they may disregard some of these. But, for the most part, if you’re familiar with these guidelines, you’ll be able to play with any group and not feel like you’re doing things wrong. 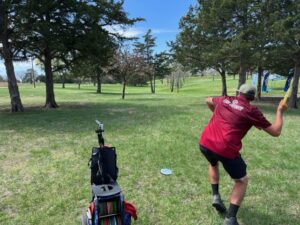 This mannerism is pretty self explanatory. After everyone throws their initial drive, the group will progress up towards the basket. Ideally, they’ll stop behind the first disc that they come upon. Allowing the individual furthest from the discatcher to throw first. This is the procedure as it allows for the play to have the most flow. But more importantly, it’ll keep everyone safe from getting hit by a disc. If you have yet to be hit by a disc, it can hurt pretty bad.

Don’t distract or cause distractions while others are throwing

As disc golf derives itself from golf, it has a lot of similar mannerisms. One of these is to be quiet and calm, without causing distractions while someone is working to throw. This helps the individual throwing have focus, and be able to perform to their best ability. As you do this for others, they will in offer the same respect to you. its all about performing at your best and others doing their best.

Don’t nice a shot until it lands

There is a common believe that if you compliment someone’s throw while it is flying through the air it’ll turn bad in some way. It’ll hit a tree, have a bad skip, roll unfavorably, or some other negative thing. Basically, avoid this by waiting until someone’s shot lands and has completely stopped to compliment the throw.

Being helpful is almost always a good thing. There are a lot of things with which you can help your card mates. the big thing that I’m thinking of here, is helping your mates to find an errant disc. Sometimes when you’re playing a disc flies unfavorably and gets lost in the bush. Having all the eyes to find the disc makes the process go quicker, and it helps with the good vibes. 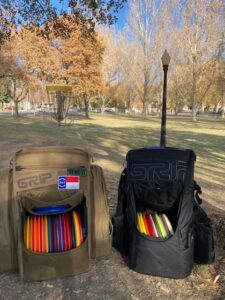 This etiquette should be followed all the time, whether you’re by yourself or with a group. These mannerisms are a must to follow.

Avoid the risk of hitting someone

Getting hit by a disc is quite painful, you should do your best to avoid hitting someone else with a disc. This means that if you are unsure as to whether you can hit someone you should err on the side of caution. Do your best to avoid situations that you may hit someone. Don’t throw over someone’s head, or throw when they’re close to your distance limit, or throw if they’re close to where you’re aiming. Getting hit sucks, lets try to limit the amount of people who can get hit by being too cautions and a little more patient.

As a side note, if you do see that your disc looks like it’ll hit someone yell “FORE”. Please do this, it is paramount to get people’s attention and give them the most time to react. Yelling “fore” a few seconds before you realize it very well could hit them doesn’t benefit anyone. It doesn’t provide them enough time to see the danger and act. So please, if it looks like it is going to hit them, yell “fore” to grab their attention.

When you’re out playing disc golf, make sure you are familiar with the park/course rules. And abide by them. You never know who will see you breaking a rule, what that person will do when you break the rule. The consequences may be nothing, or they may be large and detrimental to your disc golf community. Its better to keep the rules, and show the world that disc golfers respect the land and land owners where the course resides. One rule that I am pretty sure that exists everywhere is don’t litter. If you brought it in to the course you should take it with you, or leave it in a trash can. 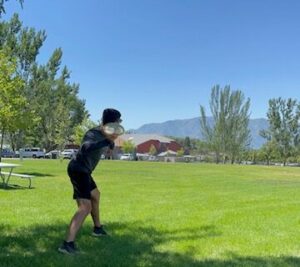 Let faster players play past you

This is something to which every disc golfer should pay attention. If someone is on your tail, see if they would like to play through you. It is courteous to let faster playing group/individual play through you. We all have different time constraints or playing speed preferences, it doesn’t take that  much longer to let someone play through you.

Losing a disc sucks, unless it was a disc that you’re okay to lose – but even then it still sucks. So if you’re out there playing and you find a disc do your best to get that disc back to the owner. Especially if it has some form of identification on it; this could be a phone number, PDGA number, name, or any combination of these things. And if there isn’t anything, there are so many Facebook groups that you could make it known to the community that you found a disc. Hopefully this will get the disc into the owner’s hands. Just think, if you lost a disc, would you want someone to try to get it back to you?

I live in an area that had a really awesome year round 18 hole disc golf course. That 18 hole course is now  a 9 hole disc golf course that is only playable during the winter months. And we get snow here, winter golf is difficult and not all that fun. In addition to this 9 hole seasonal course, this year it is threatened to not even go up. The reason this is because of disc golfers not representing disc golf in a good way. The land managers have lost a lot of respect for the disc golf community and sees it more as a nuisance than a good thing. I don’t want this sort of thing to happen to you and your disc golf community. So, be sure to represent disc golf in a good light.

Learning something new is always a little stressful, especially when you’re the novice playing with other experienced people. Rest assured, we have all been the newbie playing veterans before. And I think that the majority of us remember this, and act accordingly. To help you understand other aspects of this sport, you should also check out this how to keep score & scoring rules post.

All in all, disc golf is a pretty enjoyable sport. It makes for some good times whether by yourself or with others. It gets you outside, and helps you to find some belonging. So, keep following this disc golf etiquette and enjoy the sport!