When I was a kid, I remember watching some golf. There was one guy that was so far ahead of everyone, his score was so high! I made mention of how good he was doing and how all the other guys were mere peasants to him as they weren’t even close to him to my Father. That is when I learned that in golf the lower score is better. This confused me greatly, as this was the opposite when compared to all other sports. But, I then understood that, if you can complete the same hole in fewer strokes than the another guy, then you’re performing better than the other guy. In this article, we’ll discuss disc golf scoring.

Now Disc Golf, is quite similar to golf in this regard. The low score is the winner within a competition. Within this article we will discuss how scoring works in Disc Golf. There are a lot of similarities, and some differences. 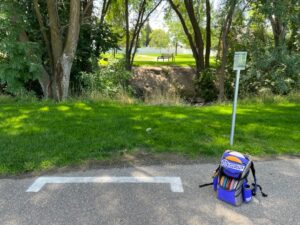 When it comes to disc golf scoring, there are a lot of similarities between Golf and Disc Golf. Some terms are the same, while other terms are different. Here are a few terms of which you should be aware of; par, birdie, eagle, ace, hazard, out of bounds, and penalty stroke. This link will take you to the PDGA’s official rules for keeping score in a PDGA sanctioned tournament, and most non-PDGA sanctioned tournament play as well.

Par: The amount of strokes it should take to complete the hole

Birdie: A term used when it took someone one stroke less than Par of the hole

Eagle: A term used when it took someone two strokes less than Par of the hole

Albatross: A term used when it took someone three strokes less than Par of the hole

Ace: A term used when an individual threw once off the teepad and the disc went into the basket (a hole-in-one)

Out of Bounds: A term used to identify a place that a disc cannot land, if it does, the thrower will take a penalty stroke and throw from where the disc entered the zone, not where it landed

Penalty Stroke: A term used to add one “stroke” to an individual’s score, this is a consequence for going out of bounds, landing in a hazard, or not following a rule. Note, the individual does not actually throw again, it is just adding one stroke to their current stroke tally

For the most part scoring is pretty simple. Every time that you throw a disc, that counts as one “stroke”. As you play a hole, you’ll count each throw until you get your disc into the basket. Then you’ll add your throws together for the total for that hole. You’ll do this for each of the holes that you play, once complete you’ll add all the holes’ stroke count to each other to get the total for the round.

For the most part, people play disc golf in a casual sense. They’re out playing a round with a couple of their friends. Adhering to the rules is quite loose and not very well watched. Out of bound, hazards, and disc lie rules may be followed or disregarded. The point of this type of play is more about playing disc golf in a very relaxed setting enjoying disc golf for what it is.

Often, score isn’t really kept in this setting. You may keep a tally of how many strokes per hole, but you may also not keep the total tally of round. Playing a casual round is focused more on the play rather than the score. As said before this is a casual round with a loose following of the rules. 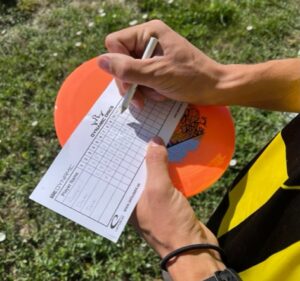 During tournament play, the score is much more important than it is in casual play. This is the time where performance matters, and rule abidance is necessary.

When it comes time to keeping score in a tournament setting, it is quite simple. One card mate will be the one to take score, per the rules, this responsibility lies on the shoulders of the first name on the card. Usually though, a card mate will volunteer to be responsible to keep score. It is okay if someone not playing volunteers to take the score for the card.

At the end of each hole, the individual keeping score will take the strokes from the players. At this point, the strokes provided should be the total throws the player took plus any additional penalty strokes. If there is a disagreement, then it falls upon all the card mates to go through the hole and all the throws and penalty strokes until there is an agreement on the score for that hole.

Then, once the round is finished, every player is to verify the score and make sure that it is accurate. Once it has been verified, the score is submitted to the TD.

Rules that can Increase your Score

Disc golf is unlike most other sports, as there isn’t a referee following each card to make sure that the player’s are following rules. For the most part, rule following is enforced by the card mates and yourself. Breaking a rule generally leads to a stroke penalty, so it is good to know them and follow them.

While playing in a tournament, there are a few rules that I keep in mind; foot fault, putting within/without the circle, and courtesy violations. As failure to follow these rules lead to penalty strokes. And increasing my score isn’t something that I need help to do. The video below describes these rules well enough that you should be able to understand them well enough to apply them in a tournament setting. The important thing to make note here, is that failure to comply to these rules will result in penalty strokes. Below are the links to the rules if you want to read up on them, and feel free to leave questions in the comments below.

Regardless of the situation in which you are playing. There are mainly two ways of keeping score, on paper or on  a app. Of the two I prefer using the app, as I pretty much always have my phone on me. And rarely do I have a scorecard on me.

A paper scorecard is a nice and simple way of keeping score. You can use any piece of paper that you have (making your own card), or you can use a premade scorecard, like the one below. Using it is quite simple, you’ll write the names of the people that are playing on the left side and then the amount of holes along the top. And then as you play each hole, take a break at the end of the hole and ask people’s stroke count. Put that number on the same row as their name and below the according hole. You’ll continue to do this as you progress through the course. Most of the time you’ll start on hole 1, but in some instances you’ll start on a different hole. You’ll still play through all the holes, you’ll just start and end on a different hole than typical.

This is my preferred method for keeping score. Its versatile, provides maps, and I almost always have my phone on me. I don’t always have a paper scorecard. Following the same method as before, I’ll still take a brief break at the end of each hole, all to grab the stroke count of my card mates. Additionally, this will keep a running total score of my overall round, which is pretty awesome. The app provides some additional features that the paper does not. Depending on the information added onto the app, it may also provide a map of the hole/course. It can even provide course rules, hazards, and other pertinent course information.

There are two apps that I’ve really enjoyed using, Infinite Disc Golf and Udisc. Currently I’m using the Udisc app, as the Infinite Disc Golf app doesn’t work all that well on iPhone. I really enjoy the Udisc app, it has a lot of courses on it, and a lot of reviews for these courses. As a side note, when I’m traveling these two things are excellent in helping me to find a good course to play.

The userface of the Udisc app is pretty easy to use. It uses my location to find a course near me. And then allows me to add individuals easily to my card. Once I’ve got it set up, it is very easy to keep track of the score and make sure that I am on the right hole. That is so long that I don’t forget to grab everyone’s score at the end of each hole. Overall, in my opinion, the app is the way to keep the score.

We’ve gone over a handful of things pertinent to disc golf scoring. These terms will help you understand what is happening out there on the course. We’ve also gone over the general way to keep the score. Whether they’re playing a tournament round or casual round. Hopefully, you now know how to keep score within a disc golf round. Whether you’re playing casually or in a tournament. Have a great time out there!