Frisbee and Disc Golf are two recreational sports that are often compared to each other. Yet, these two sports share many similarities, making people think that they are of the same. But this is not the case. Disc Golf and Frisbee are completely different from one another, specifically the disc being used and how the game is played.

In this article, we will tackle the differences between Disc Golf and Frisbee. What is the difference in terms of the disc structure? Can you use a Frisbee disc in a disc golf game? All of these questions will be answered as we compare these two exciting outdoor sports.

Frisbee and the Flying Disc Sports

In general, frisbee refers to a flying disc that is used for recreation and competitive throwing or catching. It was in 1948 that the disc was developed and was later on used in various flying disc sports.

In 1957, the American toy company Wham-o purchased the rights of the flying disc and released it later with a trademark name Frisbee. Over time, the word Frisbee has been used to refer to any flying disc.

In the 1960s, the popularity of flying discs led to the development of different recreational activities which involved throwing frisbees. Some of these flying disc sports activities are still very much alive today such as disc golf, ultimate frisbee, double disc court, dodge bee, and kan jam.

All of these recreational sports use flying discs as their primary equipment but usually differ in structure, shapes, sizes, and other features.

This flying disc game uses the 110-gram Wham-O pro model as the official disc of this sport. Although, there are practitioners who use similar discs using gameplay. This disc is easy to throw and consistently flies great for advanced throwers.

This game is inspired by dodgeball but uses a disc instead of a ball. The disc in dodge bee is known to be very soft, which allows the player to throw it very fast to the opponent without injuring any player.

Kanjam is another recreational sport that uses a flying disc to play. A Kanjam disc weighs only 168 grams and is not really designed to fly for a long distance. With the nature of the game, a kanjam disc is known for being durable and heavy-duty.

What is the Difference Between Disc Golf vs. Ultimate Frisbee 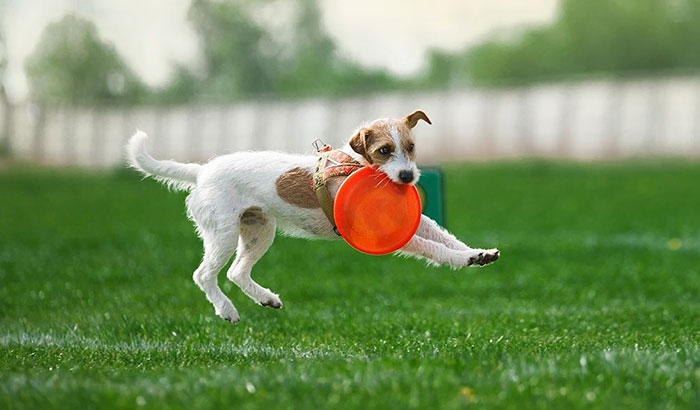 Disc golf is an individual sport, while ultimate frisbee is a team sport. Other notable differences between the two sports are listed below:

As I mentioned earlier, disc golf is basically an individual sport similar to professional golf but uses a disc during the game. On the other hand, ultimate frisbee is a team sport composed of seven players in each team during a game.

There is a big difference between disc golf and ultimate frisbee in terms of where it is played. Playing ultimate frisbee requires a field that is similar to an American football field which is around 100 meters long.

On the other hand, disc golf is played in a huge course that comes with multiple holes in the form of disc golf baskets. These holes are placed strategically throughout the field to present challenges and obstacles that disc golf players have to deal with during the game.

These two sports are also different in how it is played. The ultimate frisbee can be compared to American football, where the team will try to advance the disc to the endzone. The other team will try to stop the offensive team while getting the disc back to their position.

On the other hand, disc golf is comparable to regular golf, where a disc golfer will try to get the disc to the basket in the fewest amount of throws. Scoring is pretty similar to traditional golf, it even uses the same terms.

Frisbee’s flying disc is used in ultimate frisbee, while the disc golf disc is used in disc golf. In terms of physical appearance, those unfamiliar may think that the discs of these two sports are just the same. But actually, they are not.

In terms of size, frisbees are large recreational discs built wider and manufactured with lighter plastics. It comes with rounded edges, and does not fly as far.

Meanwhile, the golf disc is smaller in size and very dense. It can fly very fast and is designed to reach a longer distance. These two discs are completely different from one other, and all of their differences are listed below:

As I mentioned earlier, the most notable difference between these two discs is the size. In general, frisbees are generally larger compared to a disc golf disc. Disc golf discs are also thinner and probably more durable compared to frisbee.

The Professional Disc Golf Association (PDGA), which is the sport’s governing body, requires that all discs must pass to the required standards they set. One of which the disc should be 21.1 cm in diameter. Other factors such as weight, height, and rim depth vary depending on the disc type to determine the disc’s flight characteristics.

Meanwhile, frisbees are used recreationally, which means they come in various shapes and sizes. Generally, it’s bigger compared to a disc golf disc and usually measures 8 to 10 inches in diameter. This disc is basically designed for throwing and catching.

Frisbees are built with stiffer plastics where the weight is distributed in different places. And these discs are made with a wide range of plastics since this disc is normally used in recreational play.

On the other hand, a disc golf disc is made with softer and harder plastics. The disc golf discs provide more grip and are more flexible than frisbees.

A disc golf disc is more dense than a frisbee which often results in the disc feeling heavier when compared to a frisbee. They are practically the same in terms of the weight, but frisbees are lighter in proportion to the diameter.

When it comes to the disc golf disc, which is heavier, the weight is mass concentrated on the rim. The purpose of the weight distribution is to make the disc more stable and fly for a longer distance.

In fact, if you employ a similar frisbee throwing technique when using a disc golf disc, it will probably fall to the ground right away after a very short flight. You will probably spend more time practicing to be familiar with how disc golf flies.

Disc golf discs are fast flyers, while frisbees are generally slow flyers. The speed of these two is night and day if you try to compare side by side. It’s the nature of the disc golf disc to fly very fast and get a longer distance.

There is a big difference between disc golf vs frisbee. Although they do the same thing, they are different in size, dimensions, and flight characteristics. The sport itself is completely different in so many factors, making these two sports distinct from one another.