There are a lot of discs available to disc golfers. Among the four types of discs – putters, mid-range, fairway drivers, and distance drivers – each has different ratings, models, and makes. In this post, I will compare the three most common mid-range discs: Roc vs Roc3 vs Buzzz.

I will examine their differences, similarities, flight characteristics, actual flight pattern, and even which players suit them best.

The Roc disc is one of Innova’s most famous mid-range discs. It is specifically designed for professional players. It is fast, straight, and predictable.

The Roc disc has a generally straight flight. It has a very predictable flight, even in unpredictable situations. If thrown with amazing speed, the disc flies really well even in windy situations.

Although it is made for professionals, even intermediate players have a chance of handling the Roc well. One of the plastics in which the disc is available is Star. Star plastic has a very high grip. And it is extremely durable. The grip bodes well for intermediate players who haven’t yet developed the right techniques.

The Roc’s versatility, accuracy, and reliability make it a preferred all-around mid-range disc by both professionals and intermediate players alike.

The Roc3 disc is a derivation of the original Roc disc. And they have essential differences. The primary difference these discs have is their ratings, specifically speed ratings.

The Roc3 has a very reliable flight and a predictable fade, even in varying wind conditions. I can get many versatile results out of this disc using different kinds of throws. It’s perfect for professionals and reliable for intermediate players. 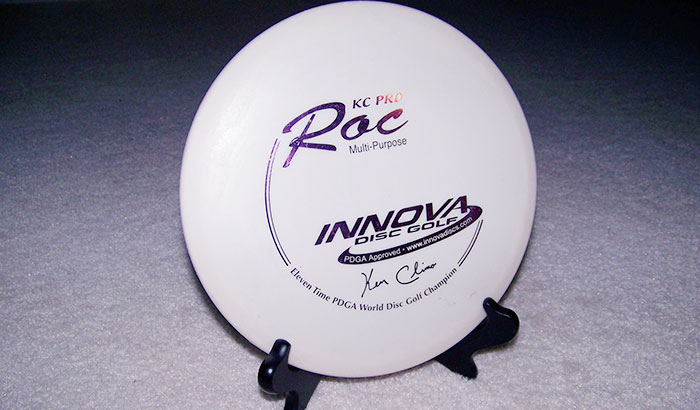 Even though the Buzzz has a turn rating of -1, it still flies straight. It’s an extremely rigid disc that will hold any angle on which a player throws it. Its minimal fade adds a layer of predictability to this disc.

Any player worth his salt can use the Buzzz to his advantage.

Roc vs Roc3 vs Buzzz = How They Fly

I threw all of these discs on a right hand backhand (RHBH) throw and compared their flight patterns.

The Roc and the Roc3 fly very similarly. The only difference is the distance they can cover. The Roc3, which has a higher speed rating, can cover more distance if thrown with a higher arm speed and momentous wrist snap.

The Buzzz, on the other hand, has a very slight yet noticeable turn. It will fly a little to the right for about 200 feet before slowly fading left. It will almost always land straight from where it’s thrown.

Overall, because the Roc3 has a very straight flight, it’s the best choice against a headwind, in my opinion. It resists turning and goes right where you want it to go.

The Roc is very easy to control and get accurate results. Both professionals and intermediate players alike can get desired results from this disc.

The Buzzz holds the angle players throw it on very well. It is extremely reliable for hyzer and anhyzer flex shots.

Which Players Suit Them Best

In my opinion, the Roc is the mid-range disc any player with decent skills can use to great advantage. It’s highly reliable, predictable, and versatile. Even headwinds are nothing against this disc if the Roc is thrown right.

The Roc3 is perfect for players with sufficient arm speed and impeccable wrist snap. The disc is capable of covering great distances as a driver. With snap force put behind it, it will easily glide accurately and holds its angle pretty well.

The Buzzz is perfect for players who got their angling locked in. The disc holds its angle till the very end. It’s perfect for hyzer, anhyzer, or any other angled shots. Of course, the player has to know what they’re doing and how they’re doing it in order to get the most out of this disc.

Roc vs Roc3 vs Buzzz – these mid-range discs have a lot of similarities and differences. And different players have varying opinions on which of these discs is best. But in my opinion, judging these discs depends on the player’s skill levels and strengths. Some players can use understandable discs better than others. Some players can use straight fliers more effectively than others. But at the end of the day, these discs perform really well in the hands of the right player.