Sometimes, a disc golf brand creates a disc mold that flies so well and which many players love. The disc golf brand then tries to improve on that original design to get more players to buy from them. Sometimes, the “improvements” don’t work, and sometimes they do. What’s the case with Discmania’s numbered MD discs? Let’s go through a solid Discmania MD3 vs MD4 vs MD5 and find out which of them is the best.

The Discmania MD3, MD4, and MD5 discs are brothers. They are all midrange discs. A midrange disc is the in-between of a putter and a driver. They should be easily controlled by all players, no matter their skill level. Any sensible disc golf player should carry a midrange disc in his or her bag. The question is, which midrange disc should you carry? Should it be the MD3, MD4, or MD5?

Though they are incredibly similar, they have differences that make them preferable over each other in certain situations.

The MD3 is a very overstable disc that has a high speed rating for a midrange disc. In all weather conditions, it performs well enough that you can use it all the time. The disc has a beaded rim that feels comfortable for me.

Let’s look deeper at its characteristics.

As I’ve mentioned already, MD3 has a high speed rating for a midrange disc. Its speed rating is 5. It also has the highest glide rating possible, which is 5. It has a 0 turn rating and a small number 2 fade rating.

With the appropriate RHBH throw, the Discmania MD3 should fly a little something like this. Being a very overstable disc, it will resist going to the right. It should fly on the line you put it on till it fades a little on the very end.

Being a midrange disc, you can expect the MD3 to fly around 300 feet maximum.

Even though midranges should be easy enough for players of low skill levels to handle, I can’t say that it applies to the MD3. The disc is designed for players with high arm speeds. I find the MD3 quite hard to master. But once I mastered it, I liked its straight and predictable flight. I can always expect the little fade at the end and I can always predict where it will land because of its consistency.

I find that the disc works best for me when thrown with a forehand. It maintains its flight path even if thrown hard. 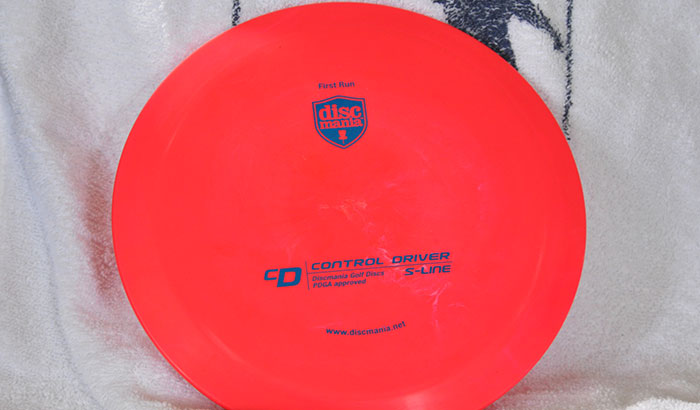 The MD3 is very overstable, but the MD4 is the MD3’s just overstable counterpart. In terms of its physical appearance, the MD4 has a blunt nose and the same beaded rim as the MD3. So if you’ve moved to MD4 from the MD3, this one should feel familiar.

The MD4 has a similar flight rating to the MD3. Its speed rating is 5. Its glide rating is 4. It has a 0 for the turn rating, and a fade rating of 3.

The way I see it, the MD4 also has a very similar flight pattern to the MD3. It also flies very straight and has a little bit more fade than its very overstable brother. However, due to its lower glide and higher fade, I discovered that I can make some shots using the MD4 – shots that I can’t do with the MD3 (more on this later).

The MD4 also flies straight but it fades earlier and harder than the MD3. The distance that it reaches is also very similar to that of the MD3 – more or less 300 feet. However, the disc is capable of nice and smooth flex shots – but doing so kind of eliminates its predictable fade at the end. With an RHFH, the disc flies straight and the fade comes as expected.

The way I see it, it takes an advanced player to be able to make the MD4 fly as it is meant to fly. This disc also takes time to master. But once you get the hang of it, it’s a reliable all-around midrange disc.

The Discmania MD5 is the most overstable midrange of all the discs this brand has produced. But in the end, it is still very similar to its predecessors, the MD3 and the MD4.

The lower glide rating of the disc makes its airtime a little shorter than the other two discs. And its higher fade rating makes it veer a little earlier than the previous discs I discussed. But still, the disc is overstable; it resists veering towards the right in an RHBH throw.

It flies straight, even against a headwind, thanks to its overstability. It is great for an approach, hyzer, forehand upshot, or flex shots. It hooks up at the end of its flight, which makes it an ideal disc for a skip shot. At full power, you can expect this disc to fly straight then fade, reaching a distance of up to 300 feet.

Of all the numbered MD discs that Discmania produces, I say that the MD5 is the most usable. It’s comfortable in the grip and it doesn’t take a player with advanced skills to get this disc working right. I feel that even amateur players can make this disc for well for them.

Discmania MD3 vs MD4 vs MD5 – which is the best? In my opinion, the MD5 is the best just because almost all players can use it. As midrange discs, I feel like all of these should be easy enough to use even for beginners. But that is not the case. MD5 is the easiest to use of the three. Plus, it has the nice characteristics of the other two discs. It’s comfortable to use, predictable, and highly usable.