When I first got interested in disc golf, I was overwhelmed by the many details of the game. And one factor of the sport that has tons of aspects is the disc. There are four main types of discs, and each disc has four spec ratings (speed, glide, turn, and fade). Plus, any disc is possibly made from tons of different types of plastic. In this article, I will discuss two types of plastic – Lucid vs Fuzion plastic.

I will discuss their differences as well as their similarities. I will also touch on how they affect the flight of a disc, their make, and what situations they are better suited to.

Lucid plastic is very durable. It is made from a combination of varying polymers that produce a beautiful translucent look. While looking very elegant, Lucid plastic can take a beating. It will last and can maintain the initially intended flight characteristics of the disc.

If Lucid plastic is considered highly durable, then the Fuzion plastic is durable. It is just as, or not quite as durable as Lucid. It takes all the polymers of Lucid plus one special polymer that provides more grip. Unlike Lucid, Fuzion plastic is non-translucent – it’s opaque. Plus, discs made of Fuzion plastic tend to have a shine.

In terms of how they fly, discs made from Lucid plastic are more overstable than Fuzion plastic. What does this mean?

Discs made of Lucid plastic tend to last longer and handle more damage. Keeping their original form longer than Fuzion plastic does. Because of this, Lucid discs tend to act more overstable than a Fuzion disc does. This difference is small and hard to tell, unless you’re throwing them one after the other.

When a left-handed player throws a disc made of Lucid plastic, it will fly a little to the left or straight, depending on the wind. Then it will fade to the right when it loses speed. If the player throws the disc forehand, the disc flies in the opposite direction with a backhand throw.

On the other hand, discs made of Fuzion plastic tend to be more understable. They tend to slowly fly to the right after a right hand backhand throw then fade to the left at the end of their flight.

This doesn’t mean, however, that all discs made from Lucid plastic are overstable, and all Fuzion discs are understable. But if I were to buy two discs of the same mold but different plastics, they will fly slightly
differently. The Lucid disc will tend to be more overstable than the Fuzion disc.

For example, imagine throwing two discs of the same mold with the following ratings: speed 11, glide 5, turn -1, fade 3. The throw is a right hand backhand. The two discs are made with Lucid plastic and Fuzion plastic. The Lucid disc will probably fly straight before fading left. On the other hand, the disc made of Fuzion plastic will fly to the right slightly before fading left.

This is why a Lucid disc is suitable for a hyzer spike; it will not turn over easily, making the throw easier.

When to Throw Them 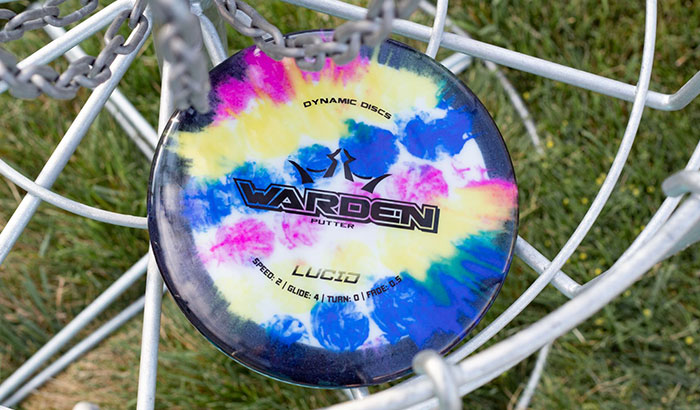 Discs made of Fuzion plastic, on the other hand, are handy when navigating tight fairways. Understable discs are better for throws where finesse is required. They require less power and are more suitable for weaker players. In fact, beginners favor understable discs because these discs can stay in the air longer.

Beginner to intermediate players favor understable discs better than overstable discs. As such, a disc made of Fuzion plastic is better for them. They can get more distance out of an understable disc even though they have limited skill and power.