Over the years, Innova has put out some of the best discs in the world. Its tendency for innovation is surprisingly consistent. In this post, I will examine two of Innova’s most well-known fairway drivers. This is a comparison between Leopard vs Leopard3.

I will discuss their ratings and dimensions. Then I will compare their flight characteristics, including their flight pattern, stability, and the distance they can cover. Then, I will explain which kinds of players can get the best performance from these famous fairway drivers.

The Leopard disc is probably Innova’s most bought disc. After all, it is one of their best fairway drivers. The disc is handy for long and straight shots. Here are its ratings and general statistics.

The Leopard fairway driver disc is designed to perform well in hyzer and turnover shots. It is slightly understandable with a minimal fade. With the combination of its relatively high speed and maximum glide, any intermediate to advanced players can achieve great distances out of the leopard.

Any player of any skill level can rely on the Leopard for a turnover shot. And any player with enough skills can stretch the distance this disc can reach with the perfectly executed hyzer flip shots.

Usually, when Innova makes derivations of their original products, they don’t make much of a difference. But in the case of the Leopard3, there are big differences from its original counterpart.

This makes a lot of difference in their flight pattern – which I will discuss later. The second noticeable difference between the two discs is how thinner the Leopard3 is. This affects its flight as well.

The disc is exceptionally controllable – more controllable than the original Leopard, in fact. It’s great for players who know how angles and arm speed affect the flight of a disc.

Leopard vs Leopard3: How They Fly 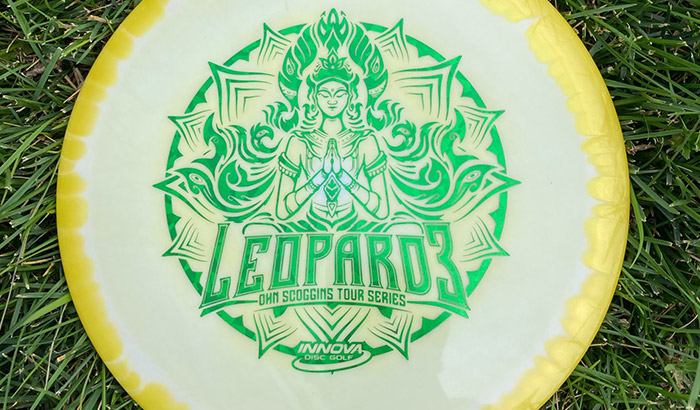 Finally, the distance the Leopard3 can cover is considerably more than the Leopard. The combination of its maximum glide and higher speed ensures that it stays in the air longer.

Essentially, I get a lot more results out of the Leopard3 than the Leopard. It is more versatile that way. However, the original Leopard is highly reliable. Both amateurs and advanced players can throw the Leopard disc and be satisfied.

If an amateur player threw both discs, their turn becomes even more subtle – almost none.

Which Players Suit Them Best

I think that the Leopard3 disc is for more skilled players. It is a very versatile disc – as long as the player knows how to manipulate its flight. Depending on the skill of the player, the Leopard3 can fly more overstable. But in the hands of an amateur, it will probably just be stable.

I would recommend the original Leopard to beginners or amateurs. It is incredibly reliable. It flies straight and can cover almost 300 feet even if the player behind it doesn’t have much force. Plus, the speed of the

Here are the final comparisons between these two discs.

The Leopard vs Leopard3 comparison gave me interesting results. Both discs are stable, but the Leopard3 can be manipulated to have more turn. They are very reliable – but the Leopard3 requires more skills to get the desired flight effects. The original Leopard is more accommodating to many skill levels. Overall, both discs can work perfectly for players of different skill levels. But in my opinion, the Leopard3 wins because the better of a player I am, the more I can achieve with it.