In the world of disc golf, many factors determine the player’s success – their skills, their strength, and the disc they use. And when it comes to discs, few brands are as good as Innova. Today, I will discuss and compare three of Innova’s distance drivers. I will break down their features to see which of them works best for which players—Innova Boss vs Innova Destroyer vs Innova Wraith.

Is Innova a Good Brand?

Innova is one of the oldest disc golf brands still going strong today. This manufacturer produces some of the most reliable disc golf products anyone can find in the market.

Innova Boss vs Innova Destroyer vs Innova Wraith – Which is the Best Driver?

The Boss currently has the world record for the longest disc flight in history. It managed to fly a distance of 1,108 feet. That distance is impressive, considering the longest disc golf courses are only 600-700 feet long. Its 2.5 cm rim width is almost the widest the Professional Disc Golf Association allows.

The Innova Destroyer’s ratings are very similar to the Boss except for its speed. However, that slight difference in ratings produces very different results in the field. Its rim width is 2.2 cm.

The Wraith is different from the Destroyer in that it is only a point slower. Of these three distance drivers, the Wraith is the most controllable. It has a rim width of 2.1 cm. 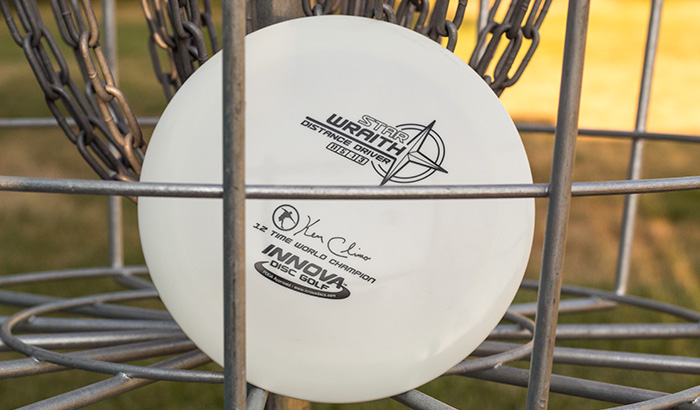 The Boss is the first ultra-high-speed disc with a speed rating of 13. It is an overstable disc – this means that it is wind-resistant. Being overstable also means that it has a higher fade rating. It will veer left when it loses speed.

It requires a player with advanced skills and great power to throw the Boss successfully. With its high-speed rating, the Boss has a great potential to reach uncharted distances. But it is hard to manage for beginner to intermediate players.

It is very light, making it highly unpredictable in flight. Its high fade makes it an excellent disc for turnover backhand throws. But those are only for precise shots. As a distance driver, it will require a player with a perfect snap to fly to at least 450 feet.

In the hand of a player with advanced skills, the Boss will fly quite straight for at least 350 feet before losing speed. It will then fade to the left in the last 100 feet of its flight. It’s not limited to these figures, though. The higher the arm speed and the more powerful the throw is, the longer the Boss can reach.

The Boss is advisable for windy situations. With its thin make and high-speed rating, it can cut through the wind if thrown with a lot of power and spin.

The Destroyer has a very similar flight pattern to the Boss. The only difference is that it will only get to around 440 feet in a skilled player’s hand. However, the Destroyer has a record of being more consistent and predictable in its flight than the Boss.

It doesn’t take as much skill and power to throw the Destroyer successfully. In the hand of an intermediate player, the Destroyer can reach more distance with a forehand throw.
With enough arm speed, the Destroyer has a very stable flight. I can get a very accurate shot out of the Destroyer even though it is not the farthest I can throw.

On average, the Destroyer flies straight for about 350 feet before losing speed. It will then circle left and reach a distance of about 440 feet.

Intermediate players can get more distance and accuracy out of the Destroyer than the Boss. It takes less skill and power to throw this disc. Many professional players prefer the Destroyer as their primary distance driver.

In terms of wind resistance, the Wraith takes the top. Even intermediate players can throw the Wraith in windy situations and expect a bit of accuracy out of it. It is a little heavier than the Destroyer, making it less susceptible to the wind.

Players of different levels can reach a lot of distance out of the Wraith. It doesn’t take as much arm speed as the Destroyer or the Boss. The Wraith works well for either backhand or forehand throws.

The Wraith has a very consistent fade. With the appropriate arm speed, the Wraith can easily reach 300 feet on a straight flight before fading slightly to the left.

The Wraith is a good option for intermediate players who want consistent accuracy out of their shots.

Which One of Them Is Best?

Determining which of these distance drivers is best depends on the player. They only differ in speed ratings and rim widths. But those differences affect their flight depending on who throws them.

The Boss has excellent potential in the hands of a highly advanced player. It takes a lot of power to throw it right. Also, considering its rim width, a player with a bigger hand can handle the Boss better than someone with a smaller hand.

Weathered players can get more distance out of the slower discs because of their predictability and consistency. In my case, I can throw the Destroyer quite well and get good results. But I find that the Wraith gives me consistently stellar results, even if it has a lower speed rating.

But the higher the power of the player is, the better they can throw the Innova Boss or the Innova Destroyer. It takes a more powerful throw to make discs with higher speed ratings to fly their intended flight.

If I have to reach a great distance, the Boss is the right option – if I have the skill and arm speed to make it fly right. If I need a disc I can rely on for any situation, the Destroyer is the way to go. If I need accuracy and consistency more than distance, the Wraith is the perfect distance driver.

Distance drivers are not for beginners. They require a lot of power behind them. And when comparing the Innova Boss vs Innova Destroyer vs Innova Wraith, the required skill levels vary. I suggest moving up from the Wraith to the Destroyer then the Boss as the skill and strength of the player increases.