The best thing about playing disc golf is how it brings your shot creativity in every game situation. That’s why it is essential to learn different types of shots to compensate for every situation you face on the field. One such case is driving through a straight tunnel where throwing a straight shot down the middle is the best option for this specific situation.

But to do this, a disc golfer must learn how to throw disc golf disc straight, because failing to do so will bring a catastrophic result. Either the throw will be off, or the player will miss the release and throw the disc into the woods. To avoid that, our team will give you tips on how to throw a straight shot accurately and efficiently.

Reasons Why the Disc Will not Fly Straight

The most important thing when throwing a flat release is to have the proper form and mechanics. Avoid starting the run-up from the right or left side of the tee pad. The shoulder must be pointed on the target line, and the player must be straight while on the tee pad before throwing the disc on flat release.

Essential Points when Trying to Throw the Disc Straight

When throwing the disc with a forehand throw, pull the disc on a straight line and provide a good follow-through. If you throw it in a perfectly linear motion, the chances are your disc will end up in a straight flight path.

If you are trying to pull the disc behind you, or worst, twist your elbow when starting the throw, the arm will come out swinging, causing the disc to release on the left side or slip out of the hand an go to the right side.

Apart from throwing it straight, another essential point to follow is the disc’s height before throwing. Is it below or above the chest? How to determine the right height for your disc when throwing? You can use your elbow and position it at a 90-degrees angle while holding the disc. The disc’s height while holding flat with the ground is the right height that you should follow when throwing the disc.

When throwing straight shots, the disc selection can also make or break your straight shot. For example, using a fuse and a stiletto in the same throw will produce a different result. Meaning, choosing the correct disc will influence your ability to throw a disc straight.

The disc’s fade rating can also affect the results of your straight shots. When you are using the right hand in throwing a backhand, the disc with a lot of fade rating tends to go left as it starts to slow down towards the end of the flight. One way to solve this issue is to use a disc with little or no fade at all. A disc that has a fade of 0 to 1 rating is what you need.

If you are using a disc with a high fade rating, you can also release it low, so that it doesn’t have a chance to fade towards the end of the flight. Although, this shortens the overall distance of the throw.

How to Throw a Disc Golf Driver Straight 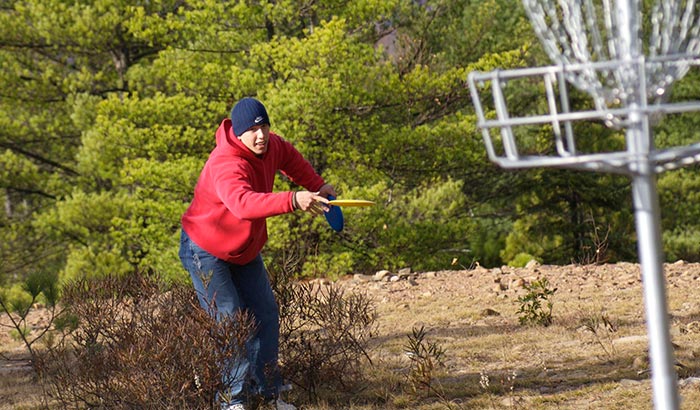 Throwing a disc golf disc straight is not an easy thing to do. But through constant practice and the determination to do it correctly will enable the disc golfer to pull it off. There are two ways to throw a disc straight. One is to use a stable disc and do a flat release, while the second one is using an understandable disc while releasing it at a hyzer angle.

But how do you do it? Please check below:

By Using a Stable Disc and Releasing it Flat

When I say using a stable disc, I refer to a disc that when thrown flat, it will turn as much as it will fade. This creates a flight path that generally doesn’t fly straight in the air, but that it will land straight in front of you rather than to the right or the left of your intended target. Something that looks like this flight chart on the left.

If you are still unfamiliar with a stable disc, you can check on the flight numbers of the disc which are printed on the surface , you’ll specifically at the turn rating (third number) and the fade rating (fourth number). A stable disc that flies straight should have a turn rating of 0 or -1, generally anything lower than this will be understable. And the fade rating should be around a 1 as well.

The main focus is to release the disc straight by pulling it off across your chest. The most important thing is not to start high and release it low or the other way around. You must throw it straight all the way right from the get-go. Or else, you will see the disc flying in hyzer and anhyzer angle instead of it flying straight as you want to.

By Using an Understable Disc with a Hyzer Release

Doing a hyzer flip will need you to put a lot of force behind the disc’s shot to flip up to flat. The thrower needs to pull the arm with a lot of quickness to generate a lot of snap. It may be difficult at first, and you might fail during the early stage of trying it. But constant practice of throwing hyzer flips will help in making the disc fly straight. Also, releasing the disc low is a key to a successful hyzer flip throw.

You can also try making some adjustments when it comes to throwing a hyzer release. If you notice that the disc continues to turn after flipping to flat, you have the option to throw the disc with a more hyzer release to balance it. Another way to adjust is to use a lesser flippy disc in your bag.

Learning different types of shots is essential when playing disc golf. Someone must have a lot of creativity when taking shots in different game situations. Therefore, it is a must for a player to learn how to throw disc golf straight because it is a skill that will be use in disc golf rounds.

There are two ways two throw a disc straight. One way is to throw a stable disc on a flat release. Another way is to use an unstable disc while throwing it on a hyzer angle. All of these methods need familiarization of the disc golfer if he wants to perfect the shots. The key is to keep on practicing until you find the right rhythm in throwing the disc straight.