In disc golf, there are different throwing techniques that a player can use in different game situations. One of which is putting arguably the most essential and used shots in the disc golf game. This throwing style also comes in various types and one of which is the spin putt. A disc golfer must know how to spin putt disc golf for him to deal with tailwinds and longer distances during the putt.

But how to spin putt the right way? There are different tips and tricks that a player can apply when doing spin putting. Our team has tried to gather other information about doing the spin putt as we try to share with our beloved readers. Our aim is for every disc golfer to learn the proper spin putting technique used in the game.

Spin putting is where you rotate your wrist at a 90-degree angle to spin the disc in the putting motion. This spinning movement will help the disc travel from afar and make it less vulnerable to the wind. But how to do it the right way? Please check on our step-by-step process when doing the spin putt.

This part of our body is essential when doing this throwing technique. Your feet together with your shoulder must be squared towards the basket, or else you will be giving yourself room for error. The feet should be in an athletic stance while using the legs to generate power during the throw. When throwing the disc, throw it in a straight line while focusing on the follow-through. It will help in making the disc spin and generate the speed towards the basket.

Putting Inside and Outside the Circle

Spin putting inside the circle is all about attacking the basket in the exact position that you want. When inside the circle, my suggestion is to throw flat to a hyzer to keep the disc at the same level as the basket. It will just be in and out of the basket directly all the time.

When it has more distance, and outside the circle, you need a little more glide on your spin putt throw. The best way to throw it is to put a little anhyzer on the disc so that the nose will get up in the air, which allows it to glide and fall forward.

There are two reasons why you throw a spin putt, accuracy or consistency, and distance. As you spin putt, the in and out motion while getting the same release point every time. You want to work on it when you get into the practice field and your practice basket. Ensuring work on that same release point while following through the shots will give you more accuracy and consistency towards the basket.

No matter what you do, the main point you want to hit is getting the same release point and making sure it is a straight line in and out towards the basket. Always focus on the accuracy while maintaining the release points and all of the basics because it will improve spin putting. Do not forget to stay on the field and keep the practice consistent with developing your spin-putting skills further.

Other Tips to Remember 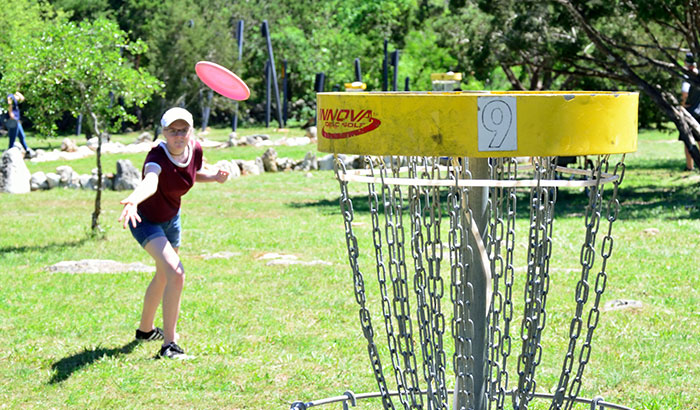 There are other things that you can do to do good at spin-putting. Please see the list below:

The putting stance will ultimately depend on the type of putting technique that a player uses. Many new disc golfers failed to improve their putting skills because they only focused on their release and grip. Many players, especially the newbie, fail to develop the proper stance, allowing the wrist, arm, and release to be smooth and effortless.

When doing the spin putt, you must make sure that the hips will end up squaring at the basket every end of the throw. Remember that proper stance always for you to improve the release point of your throw.

Try to Develop a Putting Routine

Once you already know the proper putting technique, grip, and stance, the next best thing to do to improve is to develop a putting routine. A putting routine is like a habit that you consistently do before making the spin putt. What is the purpose of the routine? It will help you put into the proper mindset and approach before doing the throw. It will also help in forcing all the muscle memory you previously develop in your spins putting throws.

There are many reasons why it is good to use spin putt in a disc golf game. Please see the list below:

When I was still new to the game, I used to spin the disc a lot to help me throw the shots. This is quite similar to spin putting if you analyze it. The spin putting uses a throwing motion which is different from the other putt throwing technique. Meanwhile, putting this way will be easy because the disc flies a straight line. Also, the disc’s release when taking the spin uses more instinct which is perfect for beginners.

Accurate and Consistent in different Distances

The key to achieving success in the sport is to stay accurate and consistent, and this is what the spin putting skills bring to your disc golf game. If you can maintain the same putting routine every time you step on the course, the more it will help make the game easier for you.

The spin putt will bring a lot of consistency and accuracy to your game. Every time you do the throw, you will be using the same release point and angle regardless of the distance. There is always an advantage if you know where the disc will go and land every time you throw, and this is what spin putt brings to the table.

Does not get Affected by the Wind

As a disc golfer, I do not like putting in the wind. It is a recipe for disaster as you will just watch your disc float in the air and pass the basket. But adding a spin putt to your skills is a great negator when it comes to dealing with the wind on the course.

With the spin putt, the disc will be less affected by the windy conditions. The disc will just spin and flies straigh towards the intended direction. It will also prevent the wind from going under the disc and pushing it out of its flight path.

If you are putting path is blocked by some obstacles, it will be difficult for you if you do not have the proper throwing technique, such as the spin putt. Dealing with a low-hanging branch of the tree can be frustrating, primarily if it blocks the basket. Spin putting is perfect in dealing with low ceiling situations, especially in dealing with obstacles. The disc will just fly, going straight to the basket with ease, even in low ceilings.

Perfect to Use Outside the Circle

Even if you are far and are outside the circle, spin putting can still help you get the job done. If you use this throwing technique, releasing the disc on the same line using the same angle will make the disc go to the basket as long as your throw is on point. Completing the disc go to the basket even from afar is not a problem with spin putting especially if you know how to maximize this throwing technique.

If you are just starting to learn disc golf, I recommend learning how to spin putt disc golf for you to bring your game to another level. There are a lot of upsides and benefits if you have this throwing technique in your skills. It will not be easy to learn it, but you will learn the proper technique and form from spin putting the disc as you spend your time on the course.