Anyone who wants to learn disc golf will face a learning curve towards his mastery of the sport. I remember ages ago when I first held a disc in my hand, I immediately noticed the numbers that were printed on the surface of the disc. I asked myself what were the numbers for? My curiosity leads me to ask my friend who was experienced enough to teach me how to read disc golf numbers. This was my very first learning curve in learning the sport that I love still till this day.

When a person is just starting the sport, I would suggest learning what the numbers mean on the disc golf discs. Learning and mastering its purpose will help a lot in shaping your skills and ability in throwing different types of shots in different game situations.

In this article, our team explain what the numbers on disc mean in the simplest of terms. We will also provide information about each number and how it will affect the behavior of the disc during the flight.

The flight rating system is often used by players to compare different discs and how they will perform during the flight in the air. Based on my experience, I can say that each disc has a distinct character and flight pattern which makes every disc unique to each other.

Additionally, different brands have used a similar flight rating systems which means, regardless of brands, the system can be used in determining the behavior and personality of the disc before buying and throwing. 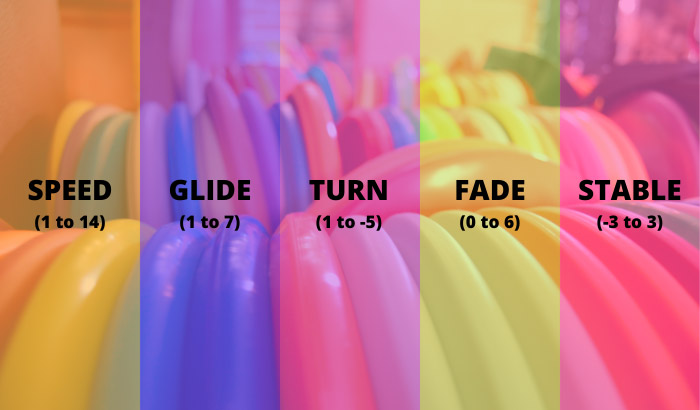 The first number found on the left side of the flight rating system is the speed rating. It is numbered from 1 to 14 and is the measurement of the disc when traveling in the air. The greater the number is on the speed rating, the faster the disc needs to travel through the air to perform optimally.

I consider the speed rating as the most important factor that must be considered by the player. It is because the speed will tell how fast the disc will be thrown in required power. Usually, a disc with a higher rating has a greater distance potential. Distance drivers have the fastest speed rating while the putters are usually the slowest.

The next number is the glide and it usually refers to the time that the disc will stay in the air. The glide rating is from 1 to 7 where 1 is the shortest time and 7 is the longest. When throwing the disc, its speed can only do so much, but the disc achieves a longer distance through its glide. If your disc has a low glide rating, it will need more power from you during the throw to achieve more air time.

If you are just starting, I would suggest using the disc with a higher glide rating because it will give you more distance during the throw. While discs with lower glide ratings will depend on the power from the player to achieve the best distance. But this type of disc is more accurate during windy conditions. Fairway and distance drivers are usually the discs with higher glide while the putters and midranges are with lower glide since it is used for short-distance shots.

The third number is the turn and is usually numbered from +1 to -5. This rating is the indicator of the tendency of the disc to curve to the right during the beginning of the flight. This is usually applicable when the disc is being thrown by a right-hand-backhand thrower. The disc with the +1 rating will have more resistance from turning over while the -5 has the more tendency to turn to the right (RHBH).

The last number found on the flight rating of the disc is the fade. It is rated from 0 to 5 and it shows the chance of the disc to go left during the end part of the flight. This is usually applicable when the disc is thrown by a right-hand-back-hand thrower.

For me, it is more of a guideline to give a player an idea of how the disc will perform when thrown. You should also remember that the type of plastic of the disc can also influence and affect the quality of the flight regardless of the rating.

There will be a situation that the actual flight pattern will not be the same as indicated on the rating system. It may sound disappointing, but there is no standard on how manufacturers determine the rating of the disc.

Each company has its own system in determining the rating of each disc that they are producing and it differs from other manufacturers. For me, it will be beneficial for the player to test for himself several discs and see for himself the one that fits his skills, form, and power.

The fact that there are some pro players that are against the flight rating system means there is something wrong with the process. However, I wager that the average player should look at the system as a helpful tool to help in determining the general idea of the disc.

The best thing to do is avoid all the negativity and take all the help that the rating system gives to all players especially to those who are just starting to learn the game.

Learning how to read disc golf numbers is important especially if you are a new disc golfer. It will help in so many ways in improving your skills and also on your disc selection during the game.

The flight rating will give you a hint on what to expect but it should not be the basis on the discs flight pattern because there are also other factors to be considered. The most important thing is to find a go-to disc that can be trusted by you in different game situations and will produce the best result.