A common consensus among experienced disc golf players is that putting is an essential skill that all must learn in playing the sport. In fact, most of your throws will be in the form of putting unless you are throwing a long shot. The quality and skill of your putt will make a huge difference when compared to the competition.

But how to putt disc golf properly? To the experienced players and those people who took the sport seriously, learning and improving your putting skill should be gradual but consistent. Meaning, you need to constantly improve every day while acquiring new putting techniques along the way that will suit your game style.

How to Throw a Putter Disc Golf

If you are a beginner, the most important thing is to master the basics of putting then improved along the way. In addition, mastering the art of proper putting can never be easy but can be learned if you put the time and effort into mastering different techniques and skills.

The correct grip when throwing a putter must be comfortable to the player. You can put the disc in the heel of your hand somewhere in the middle and rolled it up towards the index finger. The palm of your hand should flash against the disc to eliminate the disc from wobbling during the throw. Then, take your thumb and middle finger, connecting them together in the middle of the disc’s flight plate. This part is where the transfer of energy into the disc happens.

There are different ways to put your fingers on the disc with your grip. You can put your index finger up along the side of the disc, which means you will be a push putter. If you put your index finger down, that is totally fine. If you put the remaining three fingers is leaning towards the flight plate, that will lead you to a more push-putting style. While tucking the pinky and ring finger on the side will lead you to a spin-putting type.

Generally, there are three different putting techniques that you can learn. Even if you are a beginner, I am not going to dictate you to choose a specific technique to use but just to give you an overview of where to start and the things to look for. At the end of the day, putting is all about letting the disc on a straight line over and over again.

This type of putting relies on spinning the disc to move it forward to the basket. This spin can be done by opening the elbow, while the takeback is the backward motion finishing your arm bent and a 90-degree angle somewhere between your chest and your belt. When doing the arm bent, the back of your hand should face the basket, which means you need to pull the disc forward while finishing with the locking of the elbow and your hand open to the target.

Since spin putters are pulling straight into their bodies, it will be a great advantage to have the shoulder line up straight to the basket while the legs are put in a comfortable stance. If you want to add more power, you will need to find a way to pull the disc back further into the body. You will need to lower your stance and sticking out your bump a little bit more. If you want to do jump putting, you will need to create separation on the legs, load the back leg, and explode forward using the rear toe.

The push putt is done by pushing up the disc from the flight plate. The takeback of this throw is down and very low finishing with your arm fully extended somewhere between the angles and the groin. The release point of this throw is somewhere around the waist and the arms should be straight all the way from the takeback through the release point and will pass it in the follow-through. Push putters do not have the straightening of the elbow, it usually takes longer to get comfortable with the release point from the timing standpoint.

For the s-class spushers, the takeback and the arm are slightly bent and not 90 degrees like the spin putter, not straight like the push putter but somewhere in between. The takeback is going to be down around the waist, allowing them more backward movement and a little bit more bend in the arm. They will pull the disc forward towards the release point, which is about the basket height, then lockout the elbow and finish their hand in place.

Meanwhile, the takeback for p-class spushers is more downward, finishing towards the inside of the left leg while the arms are slightly bent. Then, the move upward to the release lucking out the elbow and following the hand upward pass through the release point. They also need to release angled away from the target a little bit since their motions are pulling the discs upward from the inside of their leg. The legs should be in a comfortable athletic stance, with the back leg flaring a little bit away from the target. 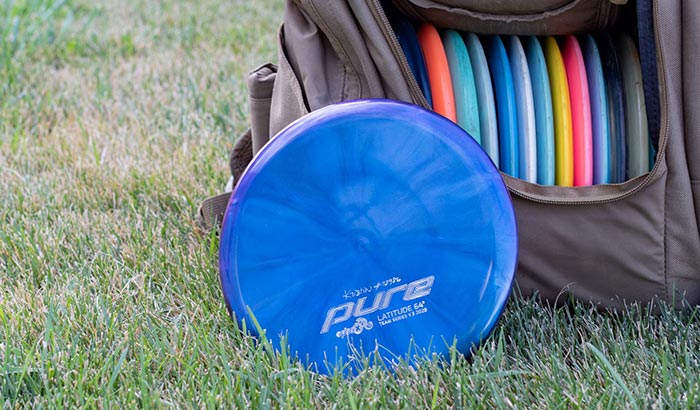 How to Putt Better in Disc Golf

Whether it’s your form, stance, pullback, release, and other techniques, all things you do are geared towards only one essential purpose. And that is to pull the disc back and move it forward in a single straight line.

It will be a great advantage to a player to create a putting routine that is very simple and can be easily repeated. It means minimizing what you do to eliminate the chances of messing up your putt.

Do not rush. Always take your time. Rushing your takeback will eventually enhance the chance of the disc going offline. On the contrary, controlling your takeback will help take the disc on the line. You can also do some breathing techniques such as inhaling and exhaling correctly to make you relax and comfortable before the throw.

Learning how to putt disc golf properly is an essential step towards developing an excellent putting game. As a beginner, knowing the basics of putting is key while learning new techniques to improve your putting game. It is important for you to spend some time on the field, developing your putting routine, and eventually applying those methods and techniques to the actual game.