In any sport, both veterans and newbies alike want to improve their game. And in any sport, improving the self has many aspects – speed, strength, technique, form, to name a few aspects. In disc golf, those aspects come into play. But perhaps one of the least understood factors of the game is how to increase arm speed.

In this article, I will discuss what arm speed is and why it’s important in disc golf. Then I will provide an in-depth technique on how to increase arm speed and, in turn, improve your disc golf game.

What is Arm Speed in Disc Golf?

A while back, whenever I heard the word “speed” within the world of disc golf, I always thought of how fast the disc travels. Little did I know that there’s another speed that plays a critical role in the game: arm speed.

My arm speed is how fast I pull my arm across my torso when throwing the disc. The faster my arm speed is, the more power I put behind the disc and the farther it goes. The faster my arm moves through the pull, the further I can throw. Faster arm speed contributes to the disc’s momentum and spin, which are both necessary to achieving greater flying lengths.

Generally speaking, maximizing both arm and disc speed is the best way to get the farthest, fastest, and most stable disc flight. But since disc speed is mostly determined by its speed rating, there’s nothing much I can do about it.

My arm speed, however, is completely in my control. And there’s a way to increase my arm speed. 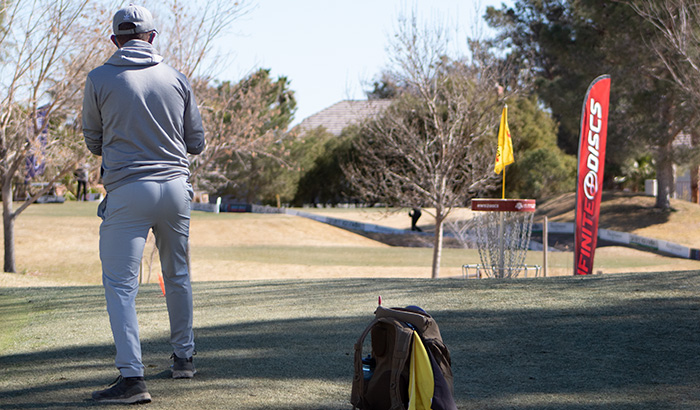 Increasing arm speed is largely done through improving form and technique. To increase arm speed, it takes more than just developing strength, although that also plays a factor. More on this later.

Get in the Right Form

There are many facets to getting the form right when it comes to disc golf. It involves proper hip engagement, good shoulder rotation, and impeccable throwing technique.

This felt weird at first, but the hips and the lower body, in general, are part of the disc golf sport. The sport is not limited to the throwing arm. In any sport, the entire body is at work.

In fact, a large portion of the throwing power comes from the lower half of the body. The lower body contains the largest muscle – the gluteus maximus (more commonly known as the glutes). It is located at the back of the hips.

Using the strong muscles in the lower body gives more power behind a throw. Whenever I go into a throw, I begin by putting my weight on the rear leg or hip. That’s the leg opposite my throwing arm.

I bend low. In this position, I’m in a closed position; my hips face perpendicularly to the direction of the throw. As I go through the motion of the throw, I go into the open position. More on this later.

The proper throwing technique maximizes the arm speed. When my hips are engaged and my shoulders rotated, my throwing arm is extended away from the target. Then, as I swivel my hips, then my torso follows, then my shoulder, my arm becomes a whip. Swiveling the hip is going from the closed position to the open position.

The kinetic energy builds up from the bottom of the body and it travels up. Its culmination is at the hand holding the disc. When I release the disc, all the kinetic energy transfers there. However, one important part of the throw is the follow-through.

The follow-through means that the throwing arm doesn’t stop when it releases the disc. It keeps going. This throwing technique gives the disc as much kinetic energy, ensuring a faster and longer flight.

As I mentioned before, the energy behind the disc throw involves the entire body. If the muscles required to move the body are weak, the throw is weak. This is why it is essential to strengthen the right muscle groups when discussing how to increase arm speed.

First and foremost, the strongest source of power behind a disc golf throw is the legs. Strengthening the leg muscles allows me to become more stable and powerful when throwing the disc.

The next set of muscles I emphatically strengthen are the muscles around my torso. These muscles include the core muscles and back muscles. These muscles give power to the shoulder rotation.

When I learned the secrets behind how to increase arm speed, they were far from what I expected. I thought the focus was going to be on the throwing arm. But the power behind a good disc golf throw comes from the entire body. By first learning how to engage my hips, rotate my shoulder, and go through the proper throwing motion, I increased my arm speed. My entire body is like a whip. The considerably slower motion from one end becomes a powerful quick movement at the other end.