Innova, one of the best disc golf brands in the market, creates its disc molds using many plastics. Of their thirteen types of plastic, the most popular ones are Star, GStar, and Champion. While Champion is so different from the others, Star and GStar are quite similar. Here’s a GStar vs Star plastic comparison that will help you determine which plastic suits your better.

Star is one of the most durable and versatile plastics for a disc. Innova markets Star plastic as equal to Champion in terms of durability which is their toughest plastic.

But, Star has one thing over any other disc line of Innova’s; the plastic offers more grip. The different blends of high-end resilient polymers make Star very durable and grippy.

Even in cold or wet weather conditions, you can rely on Star because you will not lose your grip on this. Additionally, the plastic does not warp in warm weather and it doesn’t lose its shape during the cold weather months.

I’ve mentioned that Star is extremely durable. But Star is slightly less overstable. And even though the plastic is very durable, it takes a shorter amount of time to break Star in than you would other durable plastics of Innova.

In terms of flight, the Star plastic retains its flight characteristics compared to other discs (like the DX, for example). For an RHBH throw, any Star plastic disc will turn more to the right compared to the same mold made of another plastic. This is because the plastic makes the disc less stable than its rating.

Plus, Innova sells most of its disc molds in Star plastic. So whether you need a putter, a driver, or a midrange disc, you can get them all in Star plastic. And lastly, Star is also popular for its penchant for retaining stamps well. By all accounts, Star is very versatile, durable, usable, and tailors to all players with different tastes.

In short, players of any skill level will love the Star plastic. It’s reliable, durable, predictable, and provides more grip (which is handy for beginners). 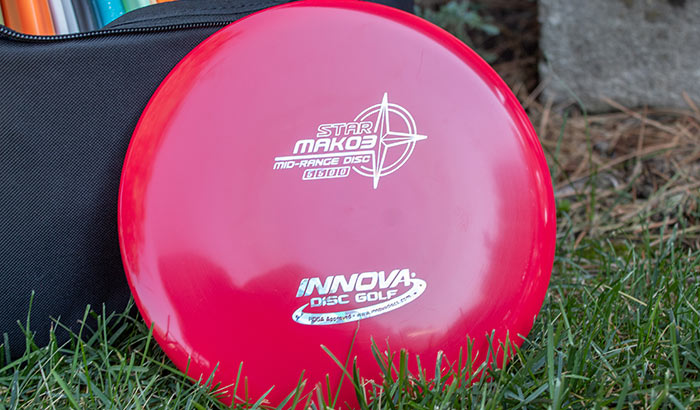 The GStar plastic is fashioned after the Star plastic. It is actually extremely similar to its predecessor. It is also very durable, predictable, and reliable. But if you love how grippy Star is, you might get infatuated with GStar. The G in GStar actually stands for grippy. So if you think that Star is grippy, wait till you get a hold of GStar.

In all aspects, the Star and GStar plastics are practically the same, except for their amount of grip, durability, and stability levels. The GStar plastic is as durable, flexible, and versatile as Star plastic. And like the Star plastic, the GStar plastic does not get affected by changing weather conditions throughout the year. It is a consistent year-round disc.

In the cold winter months, any Innova disc made of GStar will not stiffen up as other plastic types do. It absorbs impact better than most, if not all, plastic types in colder temperatures. And in the summer, the disc does not get too flexible and soft. Even if you flex it a bit, the disc will return to its original mold faster than any other plastic type Innovahas to offer (Champion, Z Line).

Although GStar is fashioned after Star, Innova improved on the original Star. Aside from giving GStar more grip, Innova also manufactured GStar to be superior in durability to the original Star plastic.

And in terms of stability, the GStar plastic tends to be more under stable than the regular Star plastic. This means if you have two discs of the same mold, one Star and the other GStar, they will not fly exactly the same way. The disc made of GStar will fly a little more to the right compared to Star if thrown with an RHBH.

If you need a disc that you can consistently rely on for the entire year, I suggest buying one made of GStar plastic. You will have the most grip, and you can rely on its performance year-end and year out.

GStar vs Star – Which is the Better Plastic Type?

I have to say that GStar is definitely better for most beginners. It is superior both in grip and durability compared to the Star plastic. For beginners, GStar is a good disc to start with because of its versatility and flexibility. A starting player can get a lot of use from a GStar all year before it shows signs of wearing out.

Plus, the superior grip makes GStar easier to use, generally speaking. But of course, as your skill level develops, you may want to move beyond what is easy to use. The next disc I would suggest is Star. After that, you can maybe try out other plastic types.

As you are developing your skills as a disc golf player, I suggest using the most reliable, consistent, durable, and grippy plastic type. That plastic is GStar. But as your skills grow, you may want to experiment with plastic types that are a little harder to use. I suggest using the Star next because it is very similar to GStar except for inferior grip, durability, and it is more stable.