There are so many disc golf discs on the market this day. At times it may be difficult to know which one is the right one for you. If it weren’t for the flight numbers on discs it would be rather difficult to know how discs fly. Fortunately, these numbers do provide a good idea of how a disc flies. As a beginner, I remember having difficulty deciphering what these numbers meant. And most often, keeping all the numbers straight. The order of the numbers, how the number depicts the disc’s flight characteristics, and what they mean to my arm and throwing capabilities. 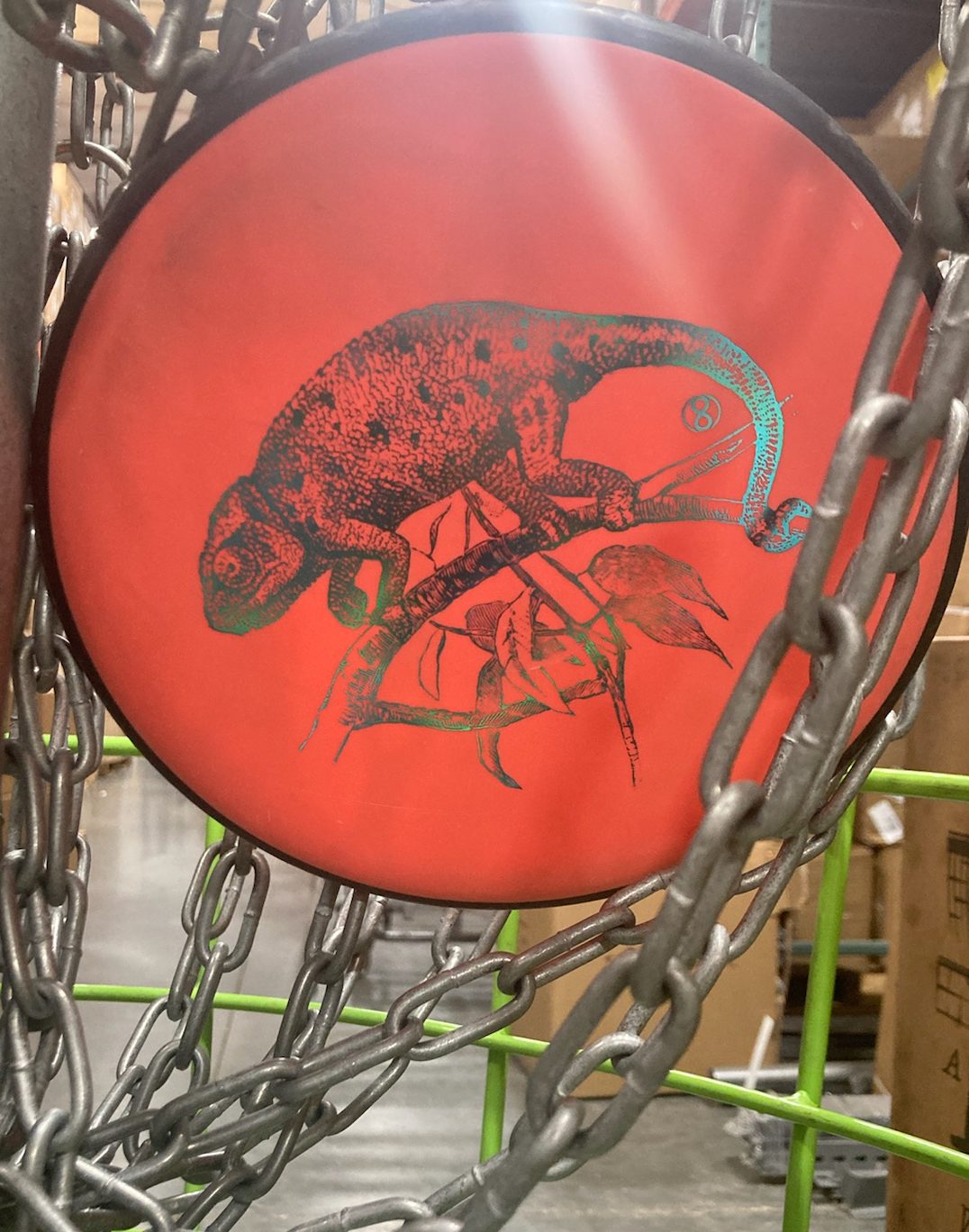 In this article we will touch a little on reading all of the flight numbers of a disc. However, it will be a brief overview of speed and glide. This article, is more to focus on Fade and Turn. We will dive deeper into these two, and how they compare to one another. If you want to learn more about all of the numbers, you should check out this article: “How to Read Disc Golf Numbers“.

For the most part, there are four flight numbers; Speed, Glide, Fade, and Turn. They’re always displayed in that order. Speed refers to how fast the disc needs to be thrown and spinning to fly “properly”. While glide refers to how much loft the disc has. Discraft adds another number; a stability rating. Where 0 means it is stable (the middle), while the greater number means it is more overstable and the lesser the number is the more understable the disc is. Now the Turn and fade refer to the aspects later in the flight. 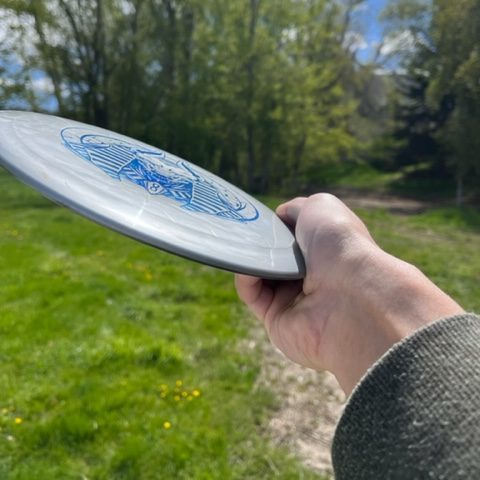 So, what is the turn, what exactly are you looking for towards the end of the flight?

The turn of a disc is visible in the latter half of the disc and ends once the disc begins to fade. In a sense, the turn is the disc’s ability to fly in the direction that is against the natural flight path. Meaning, if the disc is spinning clockwise and thrown perfectly flat, the turn is once the disc breaks from the straight line and begins to fly towards the right. The disc’s turn then ends once the fade begins, or when it starts to fall towards the left – going back to its natural flight. With a counter-clockwise spin, the turn will be the disc’s propensity to turn to the left and fade.

What the Turn Number Means

What the Fade Number Means

The “Fade” number ranges from 0 to 6. I have yet to see anything above 6. Where 0 is very weak fade, and 6 is the strongest fade. What does the 0 mean? 0 is the weakest fade, it can be the easiest disc to throw that will show no “Fade”. This means that the disc will continue flying straight and end straight without falling to the side. Or that the disc will continue on the turn line and end without falling to the side (drifting to the right for RHBH/LHFH, or drifting to the left for LHBH/RHFH). For the most part, the higher the “Fade” number is the more difficult to throw and achieve distance. While the lower number will be easier to throw for distance.

How Turn and Fade Interact 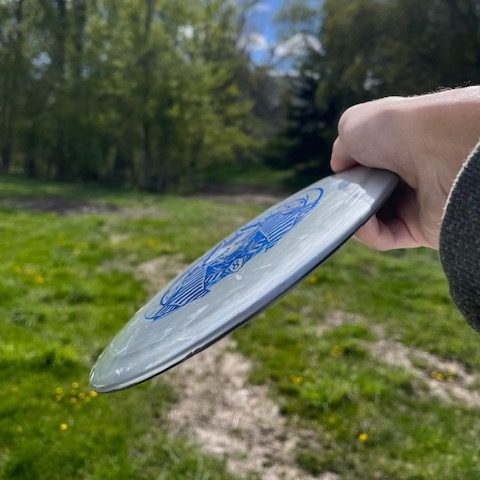 How can one tell whether a disc is understable or oversable by looking at the numbers? I find a simple solution to this question. By adding these two numbers together will provide the insight to a disc’s stability. The larger the sum is, the more overstable the disc is; and the smaller the sum is, the more understable disc is. While 0 is stable, or the middle of the spectrum, meaning the disc flies straight – its turn and fade cancel each other out, providing a straight flight. 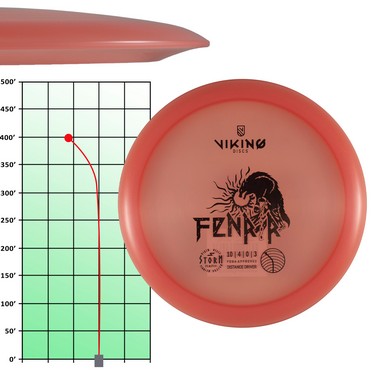 Let us look at the Viking Discs Fenrir: This is an overstable distance driver. It has the following flight numbers: Speed 10 | 4 | 0 | 3. It has a “Turn” of 0, and a “Fade” of 3. Picking apart the numbers and applying what was illustrated above, we find the following. The 0 “Turn” means this disc will not go to the right (RHBH/LHFH) when thrown flat. Then looking at the “Fade” we see a 3. This 3 is a pretty moderate fade, meaning it’ll dump to the left fairly hard. So where there is no turn and a moderate fade, we can assume that this disc is an overstable mold.

Viking Discs Fenrir is available in three plastics: Armor, Storm, and Ground. This is an overstable distance driver that is quite suitable to a large range of arm speeds. It can handle strong winds and power. This is a reliable mold, flies straight with a hard fade at the end in a large variety of weather conditions. I like the disc as it is comfortable in the hand and it is highly dependable. I’ve really enjoyed that I can get some good distance with it. That I can put this on a flex line and it will most often come out and finish to the left (RHBH). This is a go-to for me when I am facing a headwind, or I need an assured disc that will come back to the left. 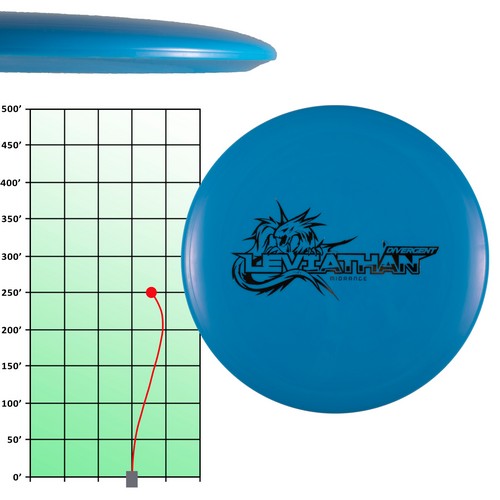 Now we will look at the Divergent Discs Leviathan: this is an understable midrange. It has the following flight numbers: Speed 5 | Glide 4 | Turn -4 | Fade 0. It has a “Turn” of -4 and a “Fade” of 0. the -4 “Turn” is considered to be a high turn, so this disc wants to go right (RHBH/LHFH). With a 0 “Fade” this disc doesn’t really show a fade in its flight. Looking at both of the numbers, we see that this disc exhibits high “Turn” and no “Fade, which tells me that this is an understable mold.

The Divergent Discs Leviathan is available in two plastics: MaxGrip and MaxGrip Glow. This is an understable midrange that is quite versatile for new players and more advanced players. It is incredible easy to throw, and it glides for a while. The high glide makes it capable of flying further with less power. For me this disc flies quite true to the numbers. I can even get it to turn all the way over into a roller. I’ve seen this disc fly perfectly straight, as well as a disc that keeps on going to the right (RHBH) without ever attempting to fade out of the trajectory. For me this is a utility midrange, while for others I know that this is a favorite and often-used midrange. I enjoy throwing the Leviathan, it is a fund and useful disc.

A word of caution though, these numbers aren’t standardized. There isn’t some testing facility that throws every single disc at the same speed, angle of release, and conditions. Then takes a precise measurement of all the elements of the flight and reports back the flight numbers. I bring this up because discs will fly differently depending on who throws the disc and where they throw the disc.

The flight numbers more so pass along an idea of flight characteristics. A disc that is a Speed 7, Glide 5, Turn 0, Fade 2; will fly different for a variety of individuals. The 0 “Turn” may drift more to the right for you than for me. It may even drift so much that it cancels out the “Fade”. The point I am working to make is that the flight numbers should have a personal meaning. They’re relative to you and your throw. As such, it is good to understand what the flight numbers depict, and what that translates to your throw. 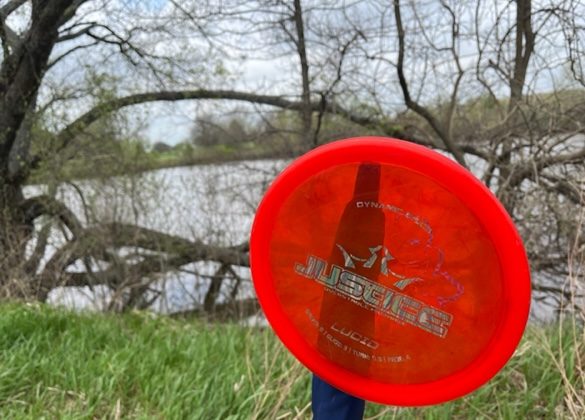 Through this article we have gone through and discussed what “Turn” and “Fade” mean. Where they show themselves in the flight. How they interact with one another. And how to tell the stability of a disc.

Hopefully, this article helps you to understand what “Turn” and “Fade” are, and how they interact with one another. That it helps you chose the best discs for you, and help you get what you’re looking to get out of a disc. Thanks for reading!