In this article, we will discuss the disc golf rules related to putting. As you can see, putting is an essential part of disc golf, and understanding the rules can be a great advantage to you as a player. It can be the most simple shot but can be one of the most technical disc golf shots. Hence, learning the rules of putting is to understand the importance of this throw in the sport.

Disc Golf Putting: The 10 Meter and Other Rules

According to the Professional Disc Golf Association (PDGA), any disc golf throw starting from 10 meters or less to the target is considered a putt. This measure comes from the base of the target and goes out 10 meters. Within this circle a player is “putting”, and must exhibit balance and control in making the throw and after the throw for a brief moment. Failure to do so means the player will commit a stance violation and will receive a stroke penalty.

There are many putting rules that you need to know in accordance with the PDGA rulebook. You need to know all of these rules to successfully execute putting the right way, according to what the rule states.

If you are not familiar, the lie is the playing area on the surface where a player will take his stance before throwing the disc. According to the PDGA rule, you need to know two things about the lie. First, leaving the disc on the ground where it landed, which becomes the player’s lie. Or, another option is to use a mini marker and place it in front and at the edge of the disc while removing the original disc. At the back of the mini-marker disc is your lie.

The second thing you need to know about your lie is its actual size on the ground. The rule says that the size is 20 cm wide by 30 cm long box. The size is actually comparable to a sheet of paper which is pretty small. So, upon throwing, your planted foot will need to land somewhere within that paper sheet behind your mini marker or disc.

The 10-meter circle around the basket is considered the putting area, which is 10 meters or less from the base of the basket. The legal move is that you will need to show control before you can advance towards the target. So, that means, when you putt, you cannot advance past the rear edge of the marker disc without showing balance and control beforehand. Once you throw the putt, you cannot go past the rear of the marker disc until you show balance and control.

Now, when you are beyond 10 meters, you can go past the rear edge of your marker disc, but you cannot have a supporting point on the ground at the time of release in front of the lie. Meaning, you can go forward, but you need to release the disc before any support point, which basically means your other foot touches the ground in front of the lie. Then, you cannot take the main support point off the ground due to the stance rule, which states that you will need to have at least one supporting point behind the disc marker on the line of play.

Putting Outside the 10-meter Circle 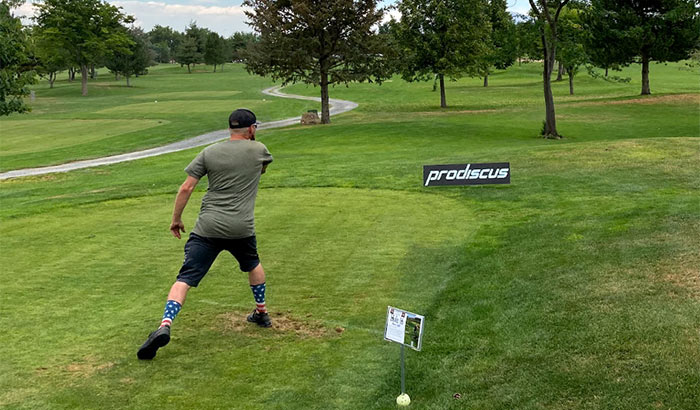 The step putt is where you put one foot at the back of the disc marker and then simply walk forward during the throw but releasing the disc before the other foot touches the ground. If you throw a disc and have a foot on the ground in front of your lie, this is a violation. Resulting in a stroke penalty.

When it comes to the jump putt, you take your stance then sway back and use your body to give you the momentum needed before the jump. Then you go up on that foot and release the disc before you leave the ground into the air and land ahead of your lie. When it comes to the jump putt, both of the feet come off the ground, but not until you release the disc.

In a modified step putt, you perform the usual step putt technique, but the main supporting point or the foot planted behind the marker disc must not move off the ground. It should stay behind the disc during the entire throw. But you need to make sure that the disc will release before putting the other foot on the ground.

Learning and familiarizing the disc golf putting rules is essential and a responsibility as a disc golf player. You cannot just throw the disc and perform a putt without knowing the rules of the game, as stated by the rulebook. As you know, there are many things that you need to know if you want to putt by the rules.